November 05, 2012
Curious how life’s minutiae can overlap. There I was, busy completing pages for the blog companion to The Lost Orchid, blissfully dredging up all manner of (copyright-free) images of glasshouses, orchids, Darwin and eccentric plant hunters. All the while I was tapping away, I was thanking the rain gods for being so busy and preventing me from having to do any actual horticulture myself.

The afternoon drew on, the sun set, the blackbirds retreated squawking into the shrubbery. Let’s have a fire, tonight, said I. Time to stop work, said he. I fished out an old mag, and stopped short, having nearly ripped up a genteel article on … Mrs Darwin’s Greenhouse. What a gem it was, tucked away in a rather upmarket varsity publication, featuring ‘secret Cambridge’. I’m a sucker for Victorian glasshouses (and in another weird coincidence, I live in Glasshouse Lane), and this piece was all about the conservatory acquired by Emma Darwin, wife to the naturalist, in 1883, after his death.

The details were wonderful, even noting that it has remained unaltered, but refurbished, built from cast iron and wester red cedar, an American timber whose natural oils prevent it from rotting. The panes are arranged like fish scales to encourage rainwater to drain away from the woodwork. The greenhouse is now in the grounds of what Murray Edwards College (ex New Hall). All the heating pipes are original, and the current-day gardener has sympathy for the poor lad who would have had to get up in the night to stoke the boiler in the winter. 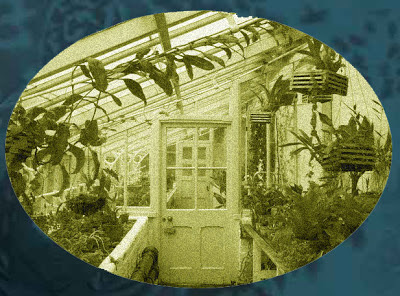 While I’m an orchidmaniac, I was fascinated to read that Mrs Darwin probably kept ferns there, its sunken design helping to conserve the heat. There are also some hart’s tongues lingering within to confirm the theory. So, all in all, perfect fodder for the sequel to The Lost Orchid, which I’ve called The Ladyfern Conspiracy. Of course, I’m already planning that blog too! You can read the article online and see a photograph of the greenhouse. I couldn’t believe my eyes when I saw it – it’s a mirror image of Charles Darwin’s own orchid house at Down House.