And double quotation marks ... so not quite Morse

These three Ds have become prominent in my life since the editing really kicked in. 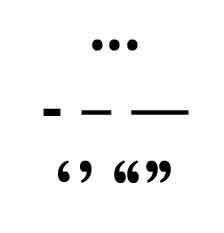 I like to think I have a firm grasp of grammar and punctuation. My parents corrected me all the time when I was growing up. One was a sub-editor, the other a teacher, both Scots. ‘Me and Janet went swimming,’ I’d say. Cue rolls of thunder and a rumbling chorus of disapproval which I can only capture in capitals. ‘JANET AND I WENT SWIMMING.’ They’d always say it together, even if they were in different rooms. As for punctuation, I wasn’t allowed to get away with a thing. ‘Full stop. Capital letter!’

My grammar improved, thanks to Latin – not English. This I ditched as soon as I could. (I think this was mainly due to Jane Austen. I apologise to her fans, but you couldn’t pay me to read it. People have tried and failed.)

Working for different newspapers assisted in my punctuation apprenticeship. Each had its own ‘house style’. Not so much guidelines, these were absolutes and adhered to on pain of death. Dot, dot, dot was frowned on, unless in speech or a fancy feature. They were always a fiddle, because in most places I worked, you had insert a ‘thin’ before the first dot, thins between the dots and final thin at the end. Luckily, our in-house computer system was sufficiently sophisticated to allow for macros, so I programmed mine up so my fingers didn't fall off. The same applied to the ‘en’ rule, or ‘nuts’. Woe betide anyone who forgot the spaces … or the second ‘en’ rule if the phrase was mid-sentence.

So, when it came to editing the first ebook, I was astonished see that no spaces were allowed – at all! I gather it gums up the digital works. See how technical I’m becoming? That’s fine by me, of course. I don’t have a preference. As a slogging ex-sub-editor, I’m happy to fall in with practice. If it's clear, fine by me.

Then I found out the ‘no-space’ rule also applied to dashes. Fine, again, but then I had to do my homework. It seems there are four dashy-type things. There’s the hyphen (-). Check. Slightly wider is the minus sign, which you find on a number pad. A lot of people use the hyphen, but the sharp-eyed among you know the minus sign is marginally wider. Then there’s the ‘en’ rule (–), and, finally the ‘em’ rule (—), called ‘muttons’, apparently. My American editors all use the long ‘em’ rule. I struggled to find it on my keyboard. When I attempted a series of keystrokes to create it, I actually converted the blinking cursor into an ‘em’ rule. How daft is that! Now I just copy it from a browser search and replace the lot in one go.

The trickiest thing to sort was the double quotation. Again, I really don’t care, as long as it’s all consistent, but I find it much faster to type the single apostrophe then constantly have to hit the shift 2 for the double. But there is a difficulty with ‘find and replace’ in this case. The close quotation (’) is the same as an apostrophe.

Aha, but I’ve outwitted the system. All you do is convert every apostrophe into a dummy character (I use a dollar sign). Then, find and replace all the single open and close quotations with double (watching out for quotations within quotations, of course), then convert the dollar sign back into the apostrophe.

With me so far? It works, but you need to keep a clear head – and save every time you finish a round of replacing. (I learned this the hard way.) I can send you my check sheet. Really. It works.

So, after much fiddling about, I decided that I’m so used to my personal system that I shall keep typing and punctuating as I’ve always done. I’ve worked out it only takes me a focused half-hour marathon session to tidy up a 100,000-word manuscript. Yup.

You could say I just dash it off.

PS If David 'Million-word-year' Bowman is reading this, do let me know if I've made any mistooks.