F is for fission

Yup, a little bit of science

I like to stick to my strengths.  Bit of Spanish. Some 17th-century this, bit of 19th-century that. Art Nouveau. Art Deco. Orchids.

Nuclear fission is not in my bag of tricks. Science? Yoiks.

I’m married to a theoretical chemist. Computational stuff. I do journalism and schizzle. I think that’s how you spell it. He does chemistry. That’s probably why we get on. Nothing in common.

Some years ago, he received an invitation. The story goes something like this:

Hub: Hey, I’ve got a chance to defend a Norwegian doctorate.
Translation: in Norway, the system requires a PhD student to spout a bit about his thesis, a guest academic responds. Blah blah. It takes a day or two.
Moi: Norge?
Hub: Yup. Tromsø.
Moi: I’m in. Even if takes three flights. Just don’t make me row [a Viking ship].

So, we went to Tromsø with an ø. Mountains. Fjords. Islands. Norge-y things. And yes, it took three flights.

This place got under my skin before we’d even landed. I might have Viking or Sami blood, but I loved it. The huge mountains seem to lie in wait to impress you.

When we got home, some strange chemical/literary thing happened. I saw a great old movie: Dark Journey. It’s so old you can get if free on youtube, for heaven’s sake. Vivien Leigh, Conrad Veidt. Dark Nordic romance. With dark Nordic humour. 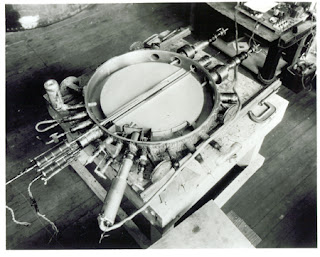 With all this going, it seemed time to write a new book, set in Norway during the 1930s. Let’s do chemistry, I said.

I came up with a plot about some science institute, and then I started to research the extraordinary history of the far north. I read diaries of the mayor of Narvik, as he defended his town.  Tales of derring do as mad Norwegian adventurers tried to reach the North Pole. Have you heard of Fridtjof Nansen? (He's the chap with the icy-coated moustache.) Champion skier, ice skater, scientist, diplomat, humanitarian and Nobel Peace Prize laureate. Quite a guy. 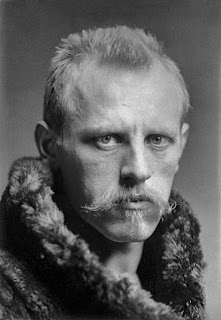 Then I hit the science. It’s astonishing what the scientists achieved during the 1930s. They had great ideas and they had to work on tiny little tables with little more than tin cans and some fancy wiring. Computers? Not yet.

I swotted up on cyclotrons, thorium (read more here), and, of course, nuclear bombs.

The Americans are so much more muscular, if that’s not too strange a word, about science. And there’s so much on the web. This site was particularly useful: http://www.mphpa.org/classic/index.htm  It’s by the Atomic Heritage Foundation. You can tell they feel about it differently across the pond. I mean, the Manhattan Project is such a sexy name. The Brits, if they’d been up to speed might have called it the Macclesfield Experiment. No disrespect, of course.