G is for Gladys

Mitchell, that is. Never heard of her?

Gladys Mitchell is my favourite crime writer. A contemporary of Agatha Christie and Dorothy L Sayers, she ploughed her own furrow. Her books are so modern it’s unnerving.

While Agatha and Dorothy mingled in sparkling society, Gladys was a schoolteacher. They got the spotlight and the movies: Gladys got a small fan base and created her own style. She attended some crime-writer parties and never returned. They were not for her. I often wonder if Agatha and Dorothy were a bit snotty.

With luck, people will appreciate Gladys one day. I was fortunate enough to trip over a bunch of her books in a charity shop in 1990-something. Everyone knows the old Penguin classics. I got a nearly 100 books for about £20. Writers, take note. This is what happens when you’re out of phase. 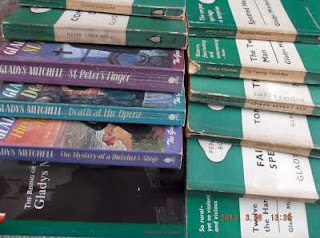 Anyway, I actually read them, and began to suspect that Gladys was something of a free spirit. The murders were all rather dashing, almost lurid. The characters so non-stereotypical it was hard to guess whodunnit. The settings were all so different and unexpected …

The investigative journalist that lurks in all of us got the upper hand a few years ago. I decided to drag Gladys into the spotlight and do a biography. Why not? It couldn’t be that hard! I rummaged around for a bit, tracking down some former neighbours and such. It’s only when I found some rare ‘Dark Lady’ sonnets that I realised she might have been gay. Not important in the scheme of things, but it suddenly made sense of so many of her plots. Sexuality was the turning point. I have no idea what it was like in the ’20s and ’30s. Too many women, too few men. Intellectual females were considered dangerous. What’s a gal to do?

I later read that she often changed her mind halfway through a book as to who was the murderer. She’d then go back and tidy up the details … over a glass of Scotch late at night, which is when she chose to write.

I love this. I relish the idea of an author shouting at the typewriter at 11pm: ‘That’s rubbish. He didn’t do it! She did! And I know why. Damn and blast. Where’s chapter six, and eight and nine? I need to tidy it all up.’

The persona that Agatha Christie exuded was effortless. Her sleuths were always rather well-behaved. Even the murderers. Maybe her mind was so clear that the stories just all went according to plan. They do work, I have to admit, and I love them. Gladys’ world is more distorted, dark and dangerous. Her people – in the 1920s – could be bisexual. Things could be complicated. Children might be fun or nasty. Men were, well. Your guess is good as hers.

Gladys didn’t just write cocktail murders. She lasted until the 1980s, which is quite something. I read one the other day. As in many of her novels, the key character is not the sleuth – Mrs Bradley appears almost as a sidekick. The narrator is a publisher, who has sneaky insights into the world of murder mysteries. Until he becomes embroiled … See? She was good.

Despite my research efforts, the publisher wasn’t enthused, and I let the matter drop. Just the other day, thinking about G is for Gladys I came upon a super website dedicated to Gladys and her life. It’s a little gem, perfectly put together and deliciously academic in its own quiet way.

I had an epiphany late that night and decided to donate all my material on Gladys. After all, it’s doing no damned good sitting in a box file in my study, is it? So, I’m now in contact with fellow fan Jason, and I have a feeling that he’ll find a new audience for Gladys’ dark charms. I wish him well.

I’m keeping all my old copies of Gladys’ books, though. Every single one.