H is for aitch 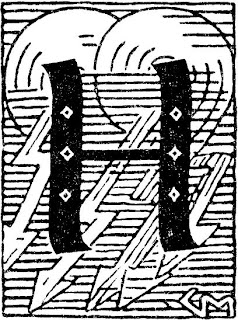 As any Scrabble player will tell you, aitch happens to be a word. It’s the noun for the letter H. It happens to have an aitch in it, but it’s at the end.

I hoard favourite words, and aitch is one of them. It’s quirky, pedantic and often horrendously mispronounced. I think it’s time to set the record straight and defend its honour.

Unhappily, my home postcode has an aitch in it. Whenever I have to give it out, I bite my tongue when people correct me. That’s 2A Haitch? Yes, 2AH. You mean haitch. Yes, I mean aitch.

I blame hignorance, of course. People should be taught to say the alphabet correctly at school. I fear that many children hear ‘haitch’, and like ‘mischievious’, once the incorrect synapse has been formed, it becomes an habitual error.

Most letters happen to be represented by the letter itself, but some are proper nouns. These exceptions are the letters aitch, jay, kay, cue, ar, ess (but es- in compounds ), wye, and zed. (On a side note,  my Edinburgh grandmother happily said ‘ji’ for the letter j, while izzard is Scots for zed.)

So, when people drop their aitches, it’s daft to say they’ve dropped their haitches. They haven’t. They’ve added them.

At present, the occurrence of aitch in English rests at 6.9 per cent, according to Wikipedia. I hazard a guess that this will rise. You see, things are getting more tense for us hardline pedants with the advent of High Definition, or HD. Even the BBC has reached a halfway house, with announcers achieving a breathless sort of ‘huh’ to appease those who don’t know any better.

For the history buffs among you, the pronunciation ‘aitch’ is from the Old French ‘ache’, the French for that letter. It is from a presumed Late Latin ‘accha’ (cf. Italian effe, elle, emme), with the central sound approximating the value of the letter when it passed from Roman to Germanic, where it at first represented a strong, distinctly aspirated -kh- sound close to that in Scottish loch. In earlier Latin the letter was called ‘ha’.

In Romance languages, the sound became silent in Late Latin and was omitted in Old French and Italian, but it was restored in Middle English spelling in words harboured from French, and often later in pronunciation, too. Thus Modern English has words ultimately from Latin with missing -h- (e.g. able, from Latin habile); with a silent -h- (for example heir, hour); with a formerly silent h now often vocalised (humble, humour, herb); and even a few with an excrescent aitches fitted in confusion to words that never had one (hostage, hermit).

Relics of the formerly unvoiced h persist in pedantic insistence on an historical (object) and in obsolete mine host.

So, are all we all clear on this hot topic? No havering or hesitation? Hexcellent. I’m happy to have been of hassistance.

NB: how many aitches can you find in this passage? Hundreds.