J is for jay 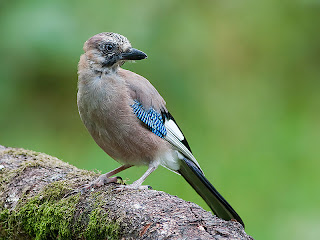 Yes, that sort of jay

I like jays, as in the bird. I’m not a twitcher (well, not in public), but my screenbreaks consist of dog walks. Spotting bird life is a highlight.

It's not a decent walk unless I see several species, preferably unusual.

Jays have real appeal, even if they are a bit flashy for the British palate. Or is that palette?

When I was about seven, I nearly had, if you’ll excuse the reference, a pink fit because I thought I’d spotted a hoopoe. About five gazillion Eye-Spy points that was worth. My grandfather kindly pointed out that it was a jay, but still rather special. (The British jays are in the 'brown' category. There are a handful of 'grey' jays and, of course, 'blue'.)

The Eurasian jay species has a very large range that extends from western Europe to southeast Asia and into northwestern Africa. Currently, there are 33 formally recognised subspecies, which are recognisably distinct and are placed into one of eight groups.

Back in Blighty, I adore seeing that flash of dusky pink, low in the trees. Just the other day, one was foraging in a nature reserve called Parliament Piece in Kenilworth. I got to within 25 yards before it gave me a weary look and swooped off into an oak tree.

The noise, too, is surprising. No mellow fluting. Well, they are a member of (wait until I look this up), the crow family. I knew that! I did. I’ll bet you didn’t know its Latin name is Garrulus glandarius. I love that. It sounds like a character from Up Pompeii.

To be fair to myself, they are rather similar to hoopoes, but without the crest. A few years ago, when we were in Egypt (eejiwipity, my granny called it, to help me spell it), it was boggling to see dozens of hoopoes pecking in the sparse grass at one of the poshest hotels. Do I recall that you can see them in delightful Ancient Egyptian art?

But jays are British, and they’re worth spotting. In the old days, they were shy and rarely moved far from cover. The screaming call usually lets you know a jay is about and they usual squawk when they’re on the move, so watch out for a bird flying between the trees with its distinctive flash of white on the rump. Now, possibly as a result of disappearing woodland, they sometimes visit parks and gardens. I've certainly seen one in mine.

They eat mainly acorns, nuts, seeds and insects. Acorns. No wonder they like Kenilworth – we have so many oak trees. I've also just found out that in French it's called a 'Geai des chênes'. Did you know, jays can store and, more importantly, retrieve several thousand acorns? The trouble is, they also consume nestlings of other birds and small mammals. Ah, well. Mother nature in the raw.

Taking things to a more mystic level, considering they are a corvid, there are surprisingly few references in folklore and mythology. However, I did find an article noting that the Celtic name for the species is 'schreachag choille' or 'screamer of the woods', a name that might imply a similar symbolism to the Greek god Pan, as a symbol of fear and the wild nature of the forest.


I did discover something curious, however. These birds, like most corvids, are talented mimics, a talent they share with the mynahs and starlings and many parrot species. They can even imitate cats. I'm not making this up.

You can listen to how they normally sound by checking out this page. It drives my dogs crackers, but it’s a lot of fun.