L is for Linacre 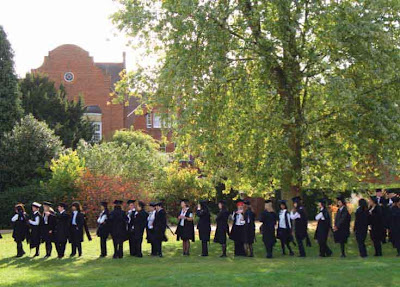 Linacre is a gem. It is a post-graduate Oxford College without pretensions that managed to find a home for me when I was lost in the Eighties.

The life choices at that time were tricky. Journalism? Publishing? Teaching? Unemployment? Lurv? Forget about it. There weren’t many options around. So, back to uni.

I was only there thanks to the assistance (or was it persistence) of a certain ex-Manchester academic who got me a stab at Oxford. There was minimal paperwork and suddenly I was invited for interview. I had no idea what to expect. Just as well.

I was shown into a delightful room and found myself facing five smiling male academics. They chatted, asked some questions, tried to put me at my ease. I tried to hold my own. On leaving, I got disorientated and instead of leaving by the door I came in, I opened the door to the broom cupboard. I’m not making this up. I stared in horror at the brushes and mops. ‘Just as well I’m not applying for geography,’ I said, and fled. Best quip I ever made. They gave me a place.

This was mainly thanks to John Bamborough, the principal, the first to hold that honour. I can’t even think of how many scholarly accolades came his way, and he was a lovely man. A classic Old School gent with debonair charm. Everyone called him Bam.

The college itself was founded in 1962, named in honour of an outstanding Renaissance figure, Thomas Linacre (c.1460-1524) a distinguished humanist, medical scientist and classicist and a great scholar of his time. The first site was in St Aldate’s, in what is now the Music Department of Oxford University. In 1977, Linacre moved to Cherwell Edge, formerly the home of a history don, a religious order of nuns and, latterly, graduate students from a variety of Oxford colleges. 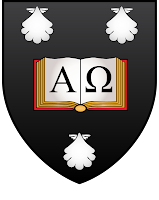 There were rumours that the convent kept a room aside as ‘punishment room’, which provided much sacrilegious fodder for our adolescent amusement.

Suddenly, I was in the hot set. We were witty and glam. We went to the latest movies. Had dinner at Browns. Held audacious cocktails parties (oh, boy). Then there was the college revue.

Everyone else was so accomplished. They could sing. Play the piano. Dance. Write scripts. All I could do was fit into a size 6 red satin flapper dress that I got from Oxfam for 80p (and which I still possess) and hope for the best. Here's me in the Big Shot sketch with Dave Donaldson who smoked a ciggy on stage in the style of James Cagney. (Any fans of the Bonzo Dog Doodah band out there?) I'm amazed he didn't set fire to the feather boa, but he had skills. 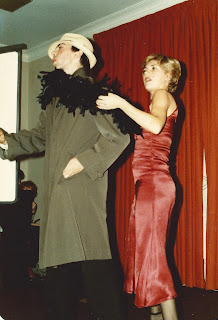 After a repressed childhood, can you imagine how much fun those rehearsals were? I laughed till I wheezed. But then came the performance. It was a blur. I must have been drunk on something. Adrenalin, of course.

Mike (who did ethnology) sang a Jungle book tribute to Bam: Whamalam. I want to be like Bam, ham, ham.Bam thought it was great. What a gent, as I said.

Rosemary, Dinah and I were nuns. This doesn’t sound funny, until you realise that Rosemary is six feet tall. Dinah, a good five foot six. I’m at leprechaun scale at five foot one and a bit if I’m stretching. In our rejigged gowns and wimple, we looked daft and amazing. I’m not even going to mention the black stockings and the whip.

I also did a bar sketch. I was never one for performance, and couldn’t remember a line to save my life. However, we found a way round it. Bam and Rupe always turned up at the bar at lunchtime. Bottled Double Diamonds were required. So, we did a skit based on an TV ad, combined with a rather tame college tradition. All I had to do was say Double Diamond in a thick northern accent. I went for Blackburn, with the burr. People were nice enough to laugh. It went down better than the beer itself.

I still visit Linacre for a Gaudy or whatever I can manage. Last summer, we went en famille: myself, hubby, daughter. When I walk through those corridors and settle in a chair in the common room, I can’t believe I was there for such a short time. Some places grip your heart and don’t let go. I had my personal ups and downs when I was there but this place etched itself on my psyche.

So, that was my shot at Oxford. I didn’t do a PhD, but I scraped together a masters at this witty, glamorous college, full of lovely vibrant  people. You can see how lovely it is here.

I don’t care that it doesn’t have 500 years of the history that the others do. Mind you, it’s now celebrating 50 years, which is pretty good. I don’t care that I was only there for a blink of the eye - at least I was there.

And I really was. And it’s not just the photos that prove it. There’s a hilarious reference in the ‘bets book’ we used to keep at the bar where I spent an inordinate amount of time. It concerned Advocaat and blue Curaçao and I lost. Badly. That’s all I’m saying.