Q is for Quiñones de Benavente

A rare dramatist with a flair for brevity

This is such a memorable name, it’s astonishing he isn’t more famous. Señor Q was the original comedy sketch artist in my book and one funny guy.

Here’s how I found this out. After school, I trundled off to Manchester University and got hooked on 17th-century Spanish literature. I particularly loved the drama. The language was clever, the plots astonishing, ranging from myth to sneaky satire, and they would have been so much fun to watch.

With some help, I pursued this interest and landed a place at Oxford to do a Masters, some fancy schmancy M.Litt – three years of funding. Yo.

This is where Quiñones de Benavente popped up. Thanks to Captain Alatriste and his mentor, Arturo Pérez-Reverte, 17th-century Spanish literature isn’t as obscure now as it was then. Of course, people have heard of Cervantes. Calderón, perhaps? Lope de Vega? I sense your interest waning.

In Spain, these chaps vie with Shakespeare, Marlowe and Jonson.

There’s an interesting diversion about how nobody understood how clever their stuff was until neoplatonism was decoded, but, hey, this is a blog. Who cares? Let’s just say, their stuff is full of imagery, wit, timing, great dialogue, politic diatribe, religious debate and stonking good stories.

Now, Q, if you recall my shorthand, showed his skill in developing a different kind of drama.I ended up studying the theory of comedy, and in particular, aspects of comedy in his works, from satire to farce.

A bit of context? Think of Shakespeare's plays. Five acts, right? Spanish plays? Three. They needed to keep the peeps busy, so that added a prologue, a dance, a little skit, a final big dance. Each of these interludes had different names (loas, entremeses, jácaras), different historical sources and were as distinctly different as appetisers. Food is a theme in all of this, for the first ‘interlude’ in drama was a servant lugging in a stuffed swan for the delight of the wealthy patrons.

Q was funny. He had great timing and he knew his actors, so he wrote them great parts. Small parts, obviously, for these were the kind of scenes you’d see in front of the curtain – just like pantomime. They were separate from the main drama,  not like Pyramus and Thisbe, in case you were wondering.

However Q was sophisticated. His characters had a lot to say about the state of the economy, lack of resources from the New World, the plight of slaves, the role of downtrodden women … It’s all there, if you know how to decipher his witty code. I had help, of course. To my supervisors, thank you. At first, these interludes just seemed like farce, but then I learned that farce isn’t farce. It’s basic ‘turn the world upside-down I want to get off’ humour – catharsis. 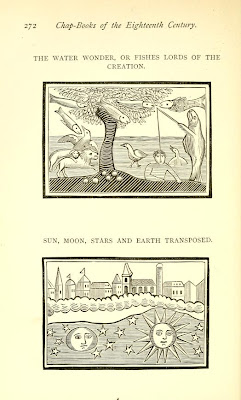 (It's not just in Spanish drama. I found this volume of 18th-century chapbooks recently on the wonderful Project Gutenberg: a series of woodcuts on the theme, plus a poem. '... Art than nature wiser grown, turns every object upside down.')

History tells us Q mingled with best: Tirso de Molina and Lope de Vega. He entered into poetic contests. Well, we know this because I found his entries! Well, not without help from a very smart PhD student from Durham whose name I’ve forgotten. He suggested I rummage this particular cabinet of hand-written record cards. Blow me down. There they were.

Only 150 short plays survive. Interludes tended not to be written or printed, but Q’s short dramas played between the acts of the most popular dramas of the seventeenth century. They are collected in the Jocoseria of 1645, notable for being the first collection of interludes in Spanish by a single author.

I like Q because he teased everyone, not cruelly, but especially those with social aspirations, such as those faking nobility. He loved the ‘play within a play’ device to engage the audience – who were all aspiring to be middle class if only they could afford it. (Spain was poor, coffers stripped by Philip II desire to rule the world.) 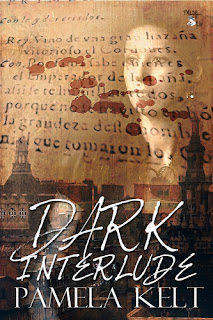 Q often joked about women tricking on men, the inversion of the sexes or faking one’s own death. This is the crazy carnivalesque fun side of Romeo and Juliet, which really should have been a comedy.

I liked him so much I even worked him into a book. It’s not set in the 17th century, although I considered that. No, I devised a story whereby an archivist would come across a censored interlude. The symbols on the cover would lead back to the Battle of Lepanto, when the Ottoman Empire first took a hit. The book, Dark Interlude, is set in 1918-19, and definitely deals with the world upside-down theme, but in a rather more sinister fashion. If I’ve piqued your interest, good! Check out Muse in June.

The Spanish manuscript in the background is actually a Lope de Vega comedia, but it's authentic.

So, Quiñones de Benavente. An entertainer but not a moralist. Satire lives. If you’re gripped, check this link. And when they mention Constable, that’s me in a former life. Oddly enough, the members of the local constabulary were most often at the receiving end of his barbs.

Does anyone else out there remember their student research? And what did you do with it?
Dark Interlude Half Life Ice Trekker news orchidmania blog The Lost Orchid Tomorrow's Anecdote