U is for unfinished


Manuscripts, that is: my hidden shame

You know the old joke about journalists. They have the answer to the great British/American novel, unfinished in a drawer.

Well, in my case, it’s patently untrue. I have dozens of unfinished manuscripts, and none of them are even close to being a novel of any kind.

Still, I had to start somewhere.

The ‘Chained books’ murder took place in a Cambridge college where the victim is strangled in a locked library by a medieval chain securing a priceless volume to a lectern. I know who did it, and how, but I never quite made it to the dénouement. I never quite sussed the title. The Chained Books Murder isn't quite right.

‘Pantomania’ is a jolly little romp behind the scenes of an am-dram production in Yorkshire where sabotage is afoot. I’ve even written all the lyrics to the songs. The assistant stage manager Hugh Calyptus has to take over the role of the dame and does a stirring jazz number, Dame Doo-Lally’s Little Shambling Blues. It has designed to be sung in a thick Yorkshire accent. You have to imagine the bluesy ‘duh-duhhh duh-duh’ after each line.

Woke up this morning.
Feeling blue. 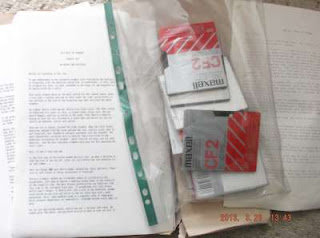 Cow had gone.
Daft chickens, too.
Now I ain’t even got a goose to say boo to.

I tried my hand at a comedy thriller script. ‘Chalk and Cheese’ is a cheeky little half-hour episode featuring a grumpy female reporter and some laid-back for a series that was going to make my fortune. Right.

Let us not forget the gazillion, and that’s the correct collective noun I believe, of short stories. Myrtle and Turtle (my daughter loved those) were favourites.

My daughter loved hearing the sequel to the Musicians of Bremen in the autumn storm where the wind makes the windows rattle? [Bangety bang. Bangety bang. I can still make her jump.] And what about Aldo the bookworm? Dudley the dragon? When did I have the time to write all this stuff? 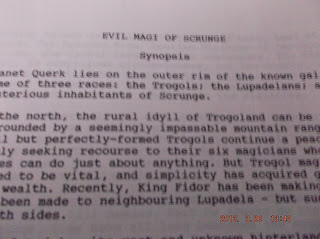 But, then, a strange moment. I found a bunch of floppy disks with the label Evil Magi of Scrunge. Then, oh, joy, I came across the whole manuscript. I had even written an ending! I’d completely forgotten about that. It’s all there in that old, squashed yet hauntingly familiar Amstrad script.

I leafed through – browsing some old friends and enemies – for Scrunge is riddled with miscreants. There’s the Procurator Fiendish, the treacherous Xerxes, the Lupadelans en masse, the cut-throat Doggabraccio. My favourite good guy is the hapless Gumnut. I’m warming to this once again, despite myself.

Well, it’s not unfinished ... Hmm. Now, we have a scanner, perhaps I should give it a go.

PS Go on, how many of you have unseen manuscripts you need to get out there? Too busy? Too embarrassed? Surely the Scrunge factor should help? If I can come clean, then so can you. I long to hear from you and all those hidden documents.
Dark Interlude Half Life Ice Trekker news orchidmania blog particle phsyics The Lost Orchid Tomorrow's Anecdote