Y is for Yanone Kaffeesatz

I can’t help myself. I see a new one and I download it – the free ones, of course.

Being from a family that included a couple of stray journalists, I’d heard about fonts, but I never really got to grips with them until I got my first job in publishing. Our Czech designer was a Bela Lugosi figure called Pavel. He’d done PhD in the philosophy of typesetting in Prague, but had to flee the Russians. His favourite word was: ‘Unbelievable.’ I can still hear him saying it in a voice so deep the walls reverberated. He also had a wide-brimmed hat and a cloak. Although he lived in Cambridge, he refused to cycle. I think he pronounced it ‘sickle’. I suspect his cape got caught in the spokes.

I use Times New Roman for writing, mainly because it’s clean and clear for proof-reading. Try starting a sentence with the word ‘ill’ in Arial, and you’ll be forced to agree.

Other fonts I tolerate, others I flirt with. Comic sans? Get out of my life. Rockwell? Lovely, for old times’ sake. Verdana? If you must. At least it’s legible.

I judge people by the fonts they use on their blogs. I keep changing mine. What seems cool and elegant one week seems pretentious the next. For its purpose, Gill sans must be one the best. On my computer it does resemble Yanone, again. Odd. 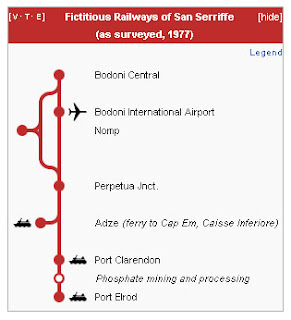 As it’s still April, just, does anyone recall one of the most brilliant April Fool japes in the Guardian? They did a whole seven-page supplement based on the exotic islands of Sans Serriffe. The capital was Bodoni; the president (ie dictator), a man called Pica, had been victorious in the latest in a string of three coups. See the map for more tyopgraphical references.

Such a journos’ joke. I read the whole thing (thinking about it, it was in the spring of ’78) and then I suddenly got the joke.

Wiki puts it well:
An elaborate description of the nation, using puns and plays on words relating to typography was reported as legitimate news. Because typographic terminology had not yet spread through widespread use of desktop publishing and word processing software, these jokes were easily missed by the general public, and many readers were fooled.

A seven-page hoax supplement appeared in The Guardian on 1 April 1977, published in the style of contemporary reviews of foreign countries, commemorating the tenth anniversary of the island's independence, complete with themed advertisements from major companies.

San Serriffe was one of the most famous and successful hoaxes of recent decades. When registering on the Guardian website it is possible to select San Serriffe as your country of origin.

I must try this. My daughter on Facebook attends the University of Narnia, so why not?

To conclude the lecture for today, Yanone Kaffeesatz is a lovely font. Trouble is, on my blog, you can hardly read it. Ah, the intricacies of the perfect font. It might look super, but if you can’t read it, what’s the point?

PS What's your favourite font? I think the A to Z challenge letters are in good old-fashioned Cooper Bold, but in green. Bit retro, but it's clear, with attitude. Personally, I'd prefer Rockwell, but that's me.
Dark Interlude Ice Trekker Machiavelli's Acolyte orchidmania blog particle phsyics The Lost Orchid Tomorrow's Anecdote