Z is for Zounds! 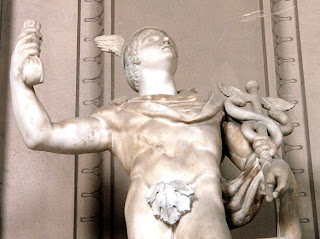 But what does it mean? As Shakespearean fans will know, it’s a shortened form of God’s wounds. Common in the 16th and 17th centuries, people would swear on God’s body parts rather than his name, thus avoiding breaking the Third Commandment, ‘Do not take the Lord's name in vain’.(There is some dispute about how it's pronounced, although most agree it probably rhymes with 'rounds' rather than 'wounds', having changed during the Great Vowel Shift. And that's not a euphemism.)

In the same vein, if you’ll forgive the expression, is 'Strewth', God’s truth. 'Gadzooks', originally a dialectal pronunciation of God's hooks, refers to the nails with which Jesus was affixed to the cross. 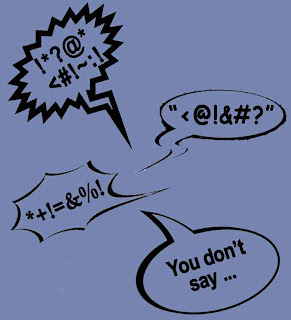 Late Elizabethan drama contains a profusion of minced oaths, arguably due to Puritan opposition to swearing.

The term for such evasive non-swearing is minced oaths, a delicately understated phrase. I happen to think that not swearing is an art form.

An old phrase from my childhood is Cricky Jings. I can’t find a reference to this anywhere, but to judge by the two first letters, I’m guessing it’s a reverse minced oath, semi-bowdlerised.

Minced oaths come in many forms. Sometimes a euphemistic expression is formed by misspelling. Sometimes it’s a deliberate mispronunciation or jumblification. Examples include ‘gosh’ for God, ‘darn’ for damn, and ‘heck’ for Hell.

Rhyme and alliteration are common. The word bloody (which itself may be an elision of ‘By Our Lady’, referring to the Virgin Mary) can become ‘blooming’ or ‘ruddy’.

There are lists upon lists of examples, many of them sounding rather quaint and American to British ears: ‘suffering succotash’, for instance. For readers on the UK side of the pond, succotash is boiled corn kernels, btw.

On occasions, the words were left in, but the censors had their wicked way. The fact these are called ‘fig-leaf’ editions makes me chuckle.

Of course, sometimes the offending word was just replaced by ‘blank’. So that’s where ‘blinking’ comes from!

PG Wodehouse was the master, of course. And I quote: ‘It’s the bally balliness of it all that makes it so bally bally.’

Fiction abounds with great minced oaths as authors struggle to portray anger, frustration or just vulgarity. I like to collect them for stressful occasions so I can let rip without offending the neighbours.

In recent years, my favourite by far is ‘smeg’ from the science-fiction comedy, Red Dwarf. It’s actually much ruder than than I’d realised – I’ll leave you to look up the medical reference. I’d always believed it was simply a satirical dig at the middle-classes epitomised by their desire for designer white goods. However, smēgma is also Greek for detergent. I wonder if the writers came up with the idea after a script was rejected for being too smutty, and the characters told to wash out their mouths with soap?

In fact, science fiction is a rich hunting ground. Think of ‘fracking’ in Battlestar Galactica, or the clever use of ‘blisters!’ in Leviathan.

Screenwriters have to be equally creative when dodging censorship. Now you can perhaps hazard a guess at what the term melon-farmer is all about. Ditto ‘monkey-fighter’ or ‘mussel-shucker’. The tongue-twister aspect adds a delicious risqué element, as you wait for the character to slip up. Blooper reel, anyone?

In real life, people swear rather a lot, especially these days. When you’re writing, it’s fun trying to find a suitable expletive that exemplifies your character, without upsetting too many readers. Minced oaths are perfect. ‘Holy Mackerel!’ is an obvious example, but things can get pretty boring if you stick to the regular minced oaths. A stroppy uncle would become far too predictable if all he said was ‘Great Scott’.

However, in Tomorrow’s Anecdote, the protagonist simply had to swear. It would have been a wet squib if she’d lost her temper in the office and just said ‘bother’ or 'drat'. This wasn't Anne of Green Gables. The experience of typing the ‘f’ word on my pristine laptop was distinctly odd. A place for everything, I decided. This was an adult novel, so I felt it was justified.


Oh my Stars and Garters. Look at the clock. Time to stop. Unless you have any more minced oaths I've never heard of. Oh, for crying out loud*.