Hi, Anthony. Welcome! This is my first blog interview, so let’s get started …

Can you describe The House of Wood in a sentence?
When I first got asked this question, I was so tongue tied. But I’ve been practising. Here goes… The House of Wood is a nightmarish trip in to one girl’s grisly past and her connection to the house.

Where did you get the idea for the story? Who or what inspired you to write this book?
Most of the time my inspiration for stories comes from T.V. or film, but this particular story started off as a writing exercise on my MA course. It was originally only supposed to be a short story, but it kept growing, taking on a life of its own. Much like the house! In the end, to do it justice, it had to be a novel.

Do you ever cast your characters? If so, who would play whom in the movie?

Hmmm, that’s a good question. In The House of Wood, I’d have to cast an awesome actresses to play Rachel, as she’d have to play two different ages.  I’d have to say either Chloe Grace-Moretz, who’s going to be brilliant in the upcoming, Carrie, or Jennifer Lawrence who’s always fantastic.


How long did it take you to write the first draft?
I have a really bad habit of procrastinating, so it got put on the backburner quite a bit. But if you put the hours together, I would say three months. In reality it was three years.


What did you do when Crooked Cat accepted your novel?
I went absolutely mental, screaming my head off in glee. It was a fantastic moment. All those hours, all that eyestrain from staring at the screen, meant something. I celebrated… A lot!


Love the cover. Were you involved in the process? How did it go?
It’s impressive isn’t it? Crooked Cat made some suggestions and sent me some mock-ups, which I approved straight away. I’m not very artistic and Crooked Cat are fantastic at what they do, so I trusted their instincts.


What was it like when you first saw the book online – and started to get those great reviews?
It was an amazing feeling to finally see it there. I remember thinking, ‘Wow, that’s my name and my words for the world to see’. It was fantastic. The reviews have been brilliant so far too. So many people are telling me how much they enjoyed reading it. It’s all very humbling. I couldn’t have wished for a better start to my career.


Where do you like to work? And when?
You can always find me at my desk in my bedroom. It’s my little place in this big world that I can go to and shut out the world. I find it really inspiring to be surrounded by my books and DVDs.


How do you work? A caffeine-fuelled rush listening to heavy metal? Or Earl Grey and Bach, perhaps?
I’m definitely the heavy metal type. I work in short, heavy bursts a couple of times a day. Everything else gets shut out. I have been known to work for eight hours flat.


What’s your favourite suspense novel?
I’m a massive fan of Stephen King and James Herbert. James Herbert was the first horror writer I read with his Rats series and Stephen King single-handedly saved the horror genre from obscurity by giving it a fresh, new take with Carrie. I admire them both very much.


What about movies and television? As a fan of suspense myself, I’m always on the lookout for something juicy and new …
Film’s a massive passion of mine. There are so many amazing suspense films out there that it would take me an entire blog to talk about them. But on T.V., there’s a new show just started in the US called Bates Motel that’s brilliant. It’s based on Hitchcock’s, Psycho. Failing that, Hannibal looks awesome, or The Following with Kevin Bacon is good. 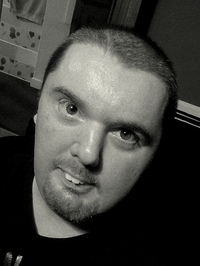 What’s next for Anthony Price, Author?
I’m currently working on my next novel. It’s kind of a spinoff from The House of Wood and will hopefully become a quadrilogy. I’m also waiting to hear back from a publisher about publishing my young adult superhero novel and working on a feature film screenplay and a potential T.V. show. Having a novel published has opened up a lot of doors. I’m very humbled by it all and feel very privileged.


Info:
Anthony Price is a twenty-eight year old male residing in the UK, in Canterbury. An avid reader and film fanatic and having always wanted to be a writer, he was first published at age fifteen and since achieving his MA in Creative Writing, has had several short stories published in e-zines and anthologies. He’s also the author of his own horror anthology titled, Tales of Merryville, which is available to buy in e-book format on Amazon.

His novel, The House of Wood, has been in the works for three years and started off as a small writing exercise on his MA. Being a disabled writer, he has had his fair share of doubters, so this novel is extra special. It’s available in paperback via Amazon and e-book format at all other retailers.


Anthony is currently working on several creative projects to look out for in the future, including more horror novels, a feature film and a TV show.