Tom Ward writes about the books he loves

May 20, 2013
A big welcome to young award-winning author Tom Ward, author of the spectacular dystopian novel A Departure. Over to you, Tom: 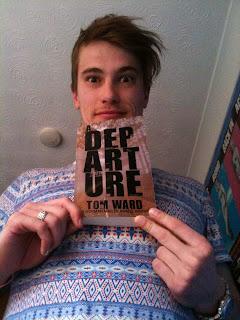 The Books I Love and How They’ve Shaped Me

I never made a conscious decision to become a ‘reader’. It was just something I did. I remember being in the first few years of primary school, and being excited to take a new book home to read. How could reading a story be homework? It was fun to let your mind wander for an hour or so. I raced through those books in primary school, eager to get ahead of the other children. I couldn’t play football, but I could beat them at reading.

Writing too seemed to come fairly easily. Having such an appetite for books helped, it meant I knew how sentences were supposed to be structured, how to lead up to a point and argue my case. Of course my writing is better now than it was a primary school, but not as good as it will be in ten years, or even ten years after that.

What we read too, is also an evolving process. Roald Dahl should be one of the earliest stepping stones for all children. I remember reading the wonderful story of Henry Sugar, aged 8 or 9, and thinking it was too difficult. This was the first sign that Roald Dahl would be with me for the rest of my life. His book of adult short stories is still one of the best things I’ve ever read. He’s truly the master of the twist in the tail.

Despite my love of reading, I never wanted to go back to school after the summer holidays (or even after a weekend). How could it be the law that you had to spend your childhood doing things you didn’t want to do? It was appalling. On these nights when I couldn’t get to sleep, I’d listen to Roald Dahl audiobooks. The B.F.G was a favourite. This was what life should be: adventures, dreams and giants, not maths and playtimes and queuing for school dinners.

After Roald Dahl, I encountered Brian Jacques and his Redwall books when the book fair came to school. My mum ran the fair and I was allowed a book as a bribe to not complain about having to stay hours after school. The Pearls of Lutra was the first Redwall book I read, and from then on I had to have them all. Each time a new book came out, or we went on a trip to a town with a large book shop, I’d take out the money I’d saved and buy a new part of the story of Redwall. They were innocent books, about mice and badgers defending an abbey, but there was evil in those books, evil, honour and adventure. It was everything I wanted. I collected almost the entire series and positioned them on my self in the order I’d read them, their gold spines glinting in the sunlight.

Nothing really grabbed me as a teenager. I’ve always thought teenage literature was awkward. Children’s authors could write for children without patronising them, but teenage authors seemed to underestimate their audience, and treat them as children at a time when they strived to be grown up. Harry Potter was a revelation, and Artemis Fowl was enjoyable enough, but it wasn’t until I encountered Lord of the Flies that I became hooked on literature again.

By now I had started to write some awful stories. I had however, been getting A*s in my GCSE English coursework, so I must have been on the right path. Then, I started work at a cinema and as we tried to avoid work, a friend told me about Hemingway, Bukowski and Cormac McCarthy. Here were stories full of adventure, blood, drinking, sex and fighting. I devoured Bukowski’s accessible style, limped over McCarthy and pushed on through Hemingway until, eventually; I could speak their language, and almost write it too. 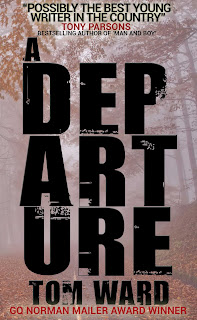 University introduced me to writers I would never have read of my own accord. Sam Selvon, Angela Carter, Ballard etc etc. By now I was actively searching out writers. I loved Buk, so wanted to read Fante and Celine. McCarthy was a hero and Patrick DeWitt filled the gap that McCarthy’s long-awaited next novel is sure to fill. I’d read On the Road, but began to explore The Beats and fell in love with The Dharma Bums.

Whenever I’d set off on my own adventures abroad (India, Mexico, Guatemala...) I’d take a beaten copy of Catch-22 along with me. Yossarian is my favourite literary creation ever. He’s funny, he’s romantic, and he’s a broken man. What’s not to love? No matter how many times I read that book, I discover something new. The same can be said of Bulgakov’s fantastic The Master and Margarita.

The list of writers goes on and on. When I won the GQ Norman Mailer Award in October 2012, I set about discovering Mailer’s work and that of judge Tony Parsons. I then spent a month in Mailer’s house, trawling through his personal collection of his own books, as well as manuscripts adoring fans had sent him, that had never got very far.

Everyday I hear about a new writer I want to read and I try not to splurge whenever I’m in Waterstones. Don Dellio, I’ll get to you. Carson McCullers, you’re on the list. Tom Wolfe, we’ve got a date. Steinbeck, I’ll be reading you for the rest of my life.

It’s important to read widely, even if you don’t want to be a writer. Even if it’s just to help pass the day. If you choose wisely and read something important, a book with something to say, a book which will make you think, not just hum along in the back of your mind for a few hours, you’ll find yourself a changed person afterwards and you’ll grieve for a long time after the last page, until, that is, you find another book to fill that void.

Info
Tom Ward’s first novel, ‘A Departure’ has been described as ‘a book that self-consciously elbows its way into the company of J.G. Ballard’s Empire of the Sun and Cormac McCathy’s The Road – and like those great books, it will stay with you for long after you have read the final page.’ - Tony Parsons.

Thanks, Tom. Inspiring stuff. I think it's definitely time to re-read some of the classics. And finally ... Good luck with all your literary ventures,