Collaboration? Yes, in a way 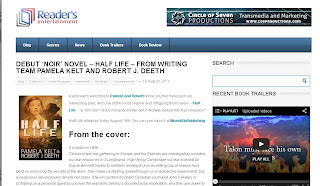 Here's a sneak peek of an interview appearing on Readers' Entertainment. It's a reciprocal interview. Well, what did you expect? It's a husband-and-wife thing.

You’re an expert in your field. How did you cope with a co-author whose understanding of science is almost non-existent?
I’ve had to put up with my co-author’s scientific ignorance for 25 years or more. In fact, I have to admit, I used it to my advantage to test out all kinds of scientific arguments to see how they might sound to a lay person. Plus … the co-author is a really good listener and forgets stuff, so I can say same thing over and over again. I also consider it part of my duty to try to make complex scientific ideas accessible. I welcome the experience. 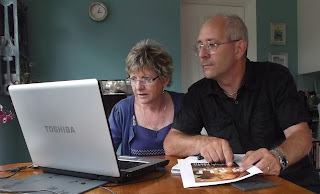 What did you like researching the most? (As if I didn’t know.)
Junkers 52 seaplanes were fun. Thorium nuclear reactions were intriguing, and the historical aspects of Fermi’s experiments and his inability to rationalise the results were fascinating. Things just didn’t fit. He knew something was up. It seemed impossible, and, in the event, his calculations turned out to be flawed.

Now you’ve survived the process, would you consider writing a book on your own? What about?
Yes. To ease myself in, I’ve been thinking about a story that would be very close to my heart based on general aviation, airfields and unscrupulous property developers. It would probably fit into the rom com thriller genre. Pilots of Penrith is the title. Oddly enough, we went to Penrith just last week! 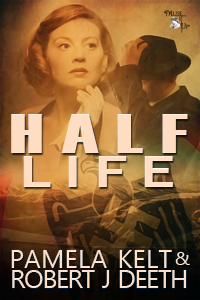 We both walk the dogs for inspiration. How many problems did you solve circuiting the Spinney, one of my favourite haunts for internal discussion and problem solving? (It’s the monotonous plodding that works for me.)
Dogs are great companions. They don’t mind if you talk to yourself. They just want you to keep throwing the stick. Besides, fresh air and pleasant environs help the creative juices.

(Note from Pam: the pic is of Chester and Lottie, totally knackered after wading in the Tweed river in the Borders. We're at a local hostelry, also recovering. The knees could only belong to Rob.)

Given my propensity to bore you rigid with science, what persuaded you to include such scientific complexities in a book, where you knew I’d have to be involved?
I like complex ‘intelligent’ thrillers, even if I don’t understand all the ideas. The key thing is get it right. Use a good source. At the end of the day, we don’t want to a boring couple who have nothing to talk about after our daughter leaves home.

How much have you/we made yet?
Arg. Not looking. Not in it for the dough. Just think of the fees we’ve saved in psychiatry.

When shall we order the new laptop?
Tomorrow! Honest. 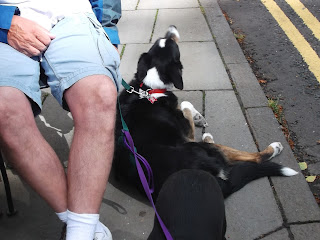 Tasmanian-born and educated, Robert Deeth is currently a professor of computational chemistry at the University of Warwick. His journey spans a doctorate at Cambridge, where he met and married co-author Pamela Kelt, a couple of temporary research positions followed by a lectureship at Bath University before the move to Warwick in 1995. He has worked in the academic scene for over two decades and is currently engaged in real nanotechnology exploring whether individual molecules can act as switches in electronic devices like computer memory. He has travelled extensively in Norway and Sweden as part of his research and teaching. He is also fluent in German, has held a private pilot licence for over 10 years and has a keen interest in WW2.

Pamela Kelt started out by taking a Spanish degree at the University of Manchester. On completion of this, and after six brain-fogging months on the local paper, she fled to Oxford and completed her M. Litt on ‘Comic aspects of satirical 17th-century comic interludes’, which was far more interesting.

After becoming a technical translator, she discovered English was easier, and did copywriting for anyone who would pay. On a stint in Australia, she landed a job as a subeditor and returned to journalism, relishing the chance to come up with funny headlines. Ah. Once a pun a time.

Educational magazines and online publishing followed. Then, one bright day, while walking the dogs, thinking ‘to hell with a career’, she took the plunge into writing for herself and is now the author of six books (some for adults, some for teens), including this title, co-written with husband Robert J Deeth, a professor of chemistry.