Krønagar is a rugged land with a past steeped in myth, none greater than ...

The Legend of Mount Vulkanen

IN THE LAND of Drasillig lived the Mennir – tall beings, with pale faces, long limbs and a strange language. They were clever and thoughtful, and built great cities all along the coastlines, where they traded and got rich. 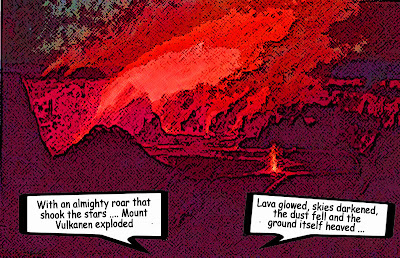 But they became lazy and didn’t want to do the hard jobs themselves, so they began to buy slaves, Grells and Minax, from far away. The sturdy Grells toiled in the fields and the slender Minax worked in the grand houses and palaces. They were treated well, but they had no freedom.

The Mennir were fond of them, in their own way. One day, all the Grells and the Minax began to sense something was wrong. The air seemed to quiver, and the ground vibrate. They warned their masters, time and again, but the Mennir just smiled and laughed and carried on eating and drinking wine. They didn’t sense anything at all.

Then, with an almighty roar that shook the stars, Mount Vulkanen exploded. The hot magma from underneath finally broke through and blew off the top. Huge chunks of rock, as big as islands, blew up into the air and down into the sea. The skies darkened, dust fell and the ground heaved. Waves flowed high as mighty towers and washed over the land, destroying all the buildings. 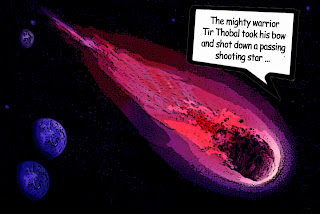 Some say the fires were put out by a great warrior, Tir Thobal, who hitched a lift on a mighty sky lizard, took his bow and arrow and shot down a passing shooting star. A vast boulder of ice landed in the heart of crater, and froze the magma in its tracks.

Find out more about Ice Trekker and the inspiration behind the story on the companion website.