Of course, the definition of a martini is a cocktail featuring gin and dry vermouth. 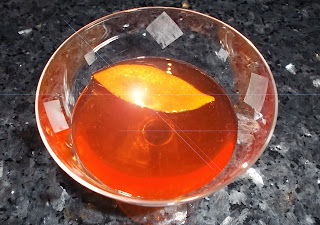 If you’ll forgive the expression, I’m going to twist the rules for a new creation, a Berlin-inspired martini, with Aperol. Rob (my husband and co-author) and I took a trip there for research, partly computational chemistry, partly for the sequel of Half Life. Our characters are sent on a tricky mission to the heart of the Nazi power base. So, off we went - and I made myself busy making mixology notes, too. 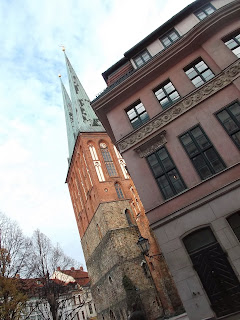 The darling of Italy, Aperol is now more widely available. It’s all over Berlin bars, too, its tangerine-coloured contents lighting up many a dark shelf. We tried it first in Venice, so it will be forever associated with luxury.

Ingredients:
One part Aperol
One part gin
One part sweet white vermouth
Dash of grapefruit
Juice of half a lemon.
Orange for garnish.
.

Shake over ice and add a twist of orange peel. The orange is a natural partner for the slightly bitter tang of Aperol.
I’m ambitious when it comes to garnishes, but ham-fisted. I have discovered a trick, however. I used my deadliest knife to peel large sections of orange peel, but there was still too much pith. Using an old-fashioned grapefruit knife, I cut this away, then abandoned dodgy blades altogether, reaching instead for a pair of scissors. I use scissors a lot in the kitchen, even when serving spaghetti!
I cut out an easy leaf shape, scoring the peel with the scissor tip to release the zest, and poured the cocktail over this. 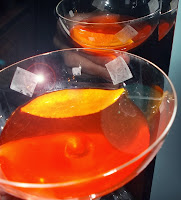 Another tip: if you’re forever opening fruit juice cartons, freeze some of the juice in ice cube trays. I had a stash of grapefruit juice cubes in the bottom of the freezer, which was just as well, as I’d almost run out of ice.
Oh, I muddle through.
As Christmas approaches, I feel I might have some more Aperol moments.
Did you know, one of the flavours in the secret Italian recipe is rhubarb? Also, it’s not as strong as you might think from the taste: its alcohol content is only 11 per cent.
By Pamela Kelt
adventure author Half Life Pam Kelt Pamela Kelt Robert Deeth writer