So many cocktails require a mix of lemon juice and a dash of Cointreau, Grand Marnier or Triple Sec.
These orange liqueurs used to be a Christmas treat for the ‘ladies’ in the household. (My grandmother particularly liked Grand Marnier. A neighbour of hers always used to call it Grand Mariner and the name’s stuck.)
But they’re costly to bung in a cocktail. Even the poorer cousin, Triple Sec, is well over a tenner for a small bottle. 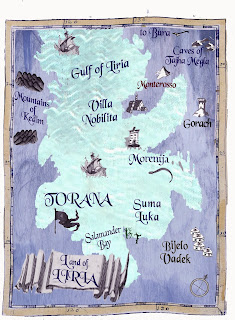 I’m currently working on The Golden Bell, book two of the Legends of the Liria series. It’s set in a Morenija, an Mediterranean-style city by the sea, famous for its citronelles, mystic orange trees that grow in every square. 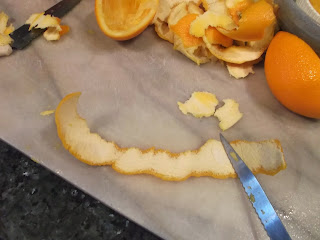 So, when it comes to making a cocktail to celebrate its completion, I began to rummage for some unfussy orange liqueur recipes. To my delight, I found a fabulous website by a chap called Gunther dedicated to all manner of home-made liqueurs, and adapted one of the recipes. It’s simplicity itself, once you’ve mastered the knack of removing the pith from orange peel.
I’ve tried potato peelers, vegetable knives, even scissors for God’s sake. However, the best weapon for me is a grapefruit knife. I slice off the peel fairly roughly, lie it flat in strips and whisk off the pesky bitter white pith in no time at all.
Here’s the recipe for what might turn out to be a halfway decent Triple Sec. (Is that a Double Sec?) It’s a work in progress, so I’ll report back. It won’t be colourless, I suspect. Perhaps a pale, orange. We’ll see.
Ingredients:
Six juicy oranges (to yield 480ml juice)
600ml alcohol (cheap schnapps is fine)
420g white sugar
Peel the zest from a couple of the oranges and squeeze the juice from all the oranges into a measuring cup and add water, if necessary, to bring juice to 480ml. Pour the juice, sugar and zest into a saucepan and bring to a boil, stirring often. Reduce the heat and simmer for ten more minutes. Set aside to cool. 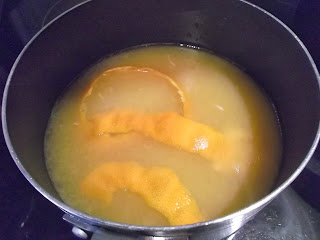 Pour the cooled juice mixture and vodka into a Kilner jar, stir to combine and seal. Let steep three to four months before straining off the orange peel and sediment.
Thoughts. I might try brown sugar next time. Brandy instead of schnapps might result in a Grand Marnier-esque potion. I’ll report back.
I feel another trip to Ikea coming on. I need to stock up on Kilner jars.
By Pamela Kelt
Legends of Liria Pam Kelt Pamela Kelt teen The Golden Bell tween writer