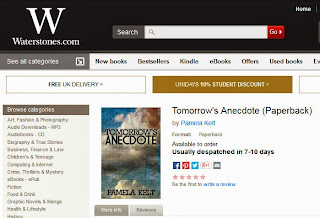 It's true. Here it is: Tomorrow’s Anecdote

Just another day in the newsroom? Hardly.

Clare Forester is an overworked and under-appreciated features sub on a provincial paper in Somerset, cheerfully ranting about her teenage daughter, her spiteful mother, her reclusive lodger, the Thatcher government, new technology, grubby journalists, petty union officials, her charming ex – and just about anything that crosses her path.

If things aren’t tempestuous enough, on Thursday, October 15, the Great Storm sweeps across Britain, cutting a swathe of destruction across the southern counties. At the office, Clare is pushed to breaking point by pushy bosses and inept colleagues, and loses her temper with gale-force fury. She is suspended from work and finds herself in therapy for stress, while her union embarks on strike action. Worse is to come.

Black Monday follows and the markets crash. But it's not just the future that's giving Clare grief.

Dark family secrets come back to haunt her.

One thing she learns ...

Never trust the past.