Victorians’ passion for ferns knew no bounds and they lusted after all the monstrous and genetically deformed plants they could lay their hands on, the more mutant the better.

Lady ferns were especially sought-after, as being one of Britain’s native ferns that yielded huge numbers of varieties such as Polystichum setiferum, the Soft Shield Fern, which gave over four hundred, and most of all the lady fern, Athyrium filix-femina, with over seven hundred. 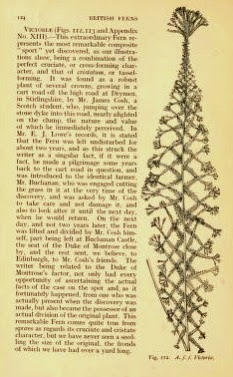 One variety was found by student James Cosh who stepped on it while jumping over a wall, and gave the original to be planted at Buchanan Castle in Stirlingshire. It gets its name because the leaves or ‘pinnae’ which break from the main stem in pairs at an angle to each other, creating a ‘V’ – for Victoria, the reigning monarch.

The diagonal lattice effect is quite charming. It seems the ‘Victoriae’ is also tall, strong growing and upright plant, with a crested edge to the frond, which gives it some class – eminently growable. In fact, they call it the 'Queen of Green'.

I was delighted to find fern specialist Fibrex Nurseries down the road in Pebworth.

Will they have one in stock? I await an email reply with baited breath ...

PS If you love botanical books, here's another find: British ferns and their varieties by Charles T. Druery. Illustrated with 40 coloured plates, 96 nature prints, and 319 wood cuts and other illustrations. Here's the illustration of the 'Victoriae' itself.