Showing posts from March, 2015
Show All

Translating the language of flowers 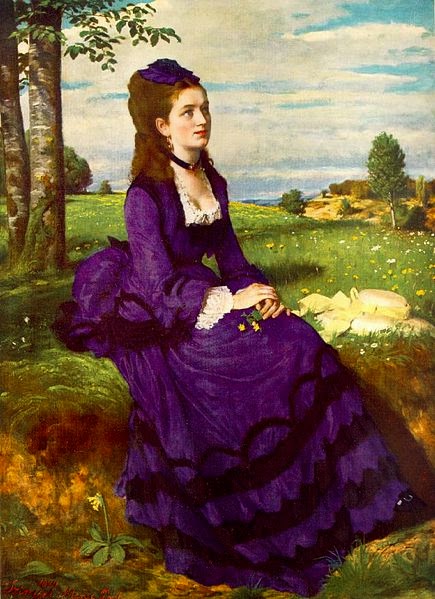 Since writing The Lost Orchid, I’ve become an avid reader of botanical history. It’s astonishing how many fabulously illustrated books there are to download free, from exquisite Middle Ages manuscripts to Victorian tomes by mad plant enthusiasts.
A few weeks ago, I tripped over some delightful books on ‘the language of flowers’, a fad revived in Victorian times when blooms were used to send a coded message to the recipient, expressing feelings that could not be spoken aloud in polite society.
Such ‘talking bouquets’ or tussie-mussies became the de rigueur fashion accessory.
Delightful books blossomed, such as Kate Greenaway’s evergreen 1883 collection of plates The Language of Flowers (although the poetry at the end is a little sentimental for my taste).
Certain blooms are well-known for their significance (roses for love), but there are lovely subtleties, such as the fact that a yellow rose means infidelity.
However, I was astonished by how many of the meanings had a darker side. Daffodil…
Post a Comment
Read more

A toast to orchids 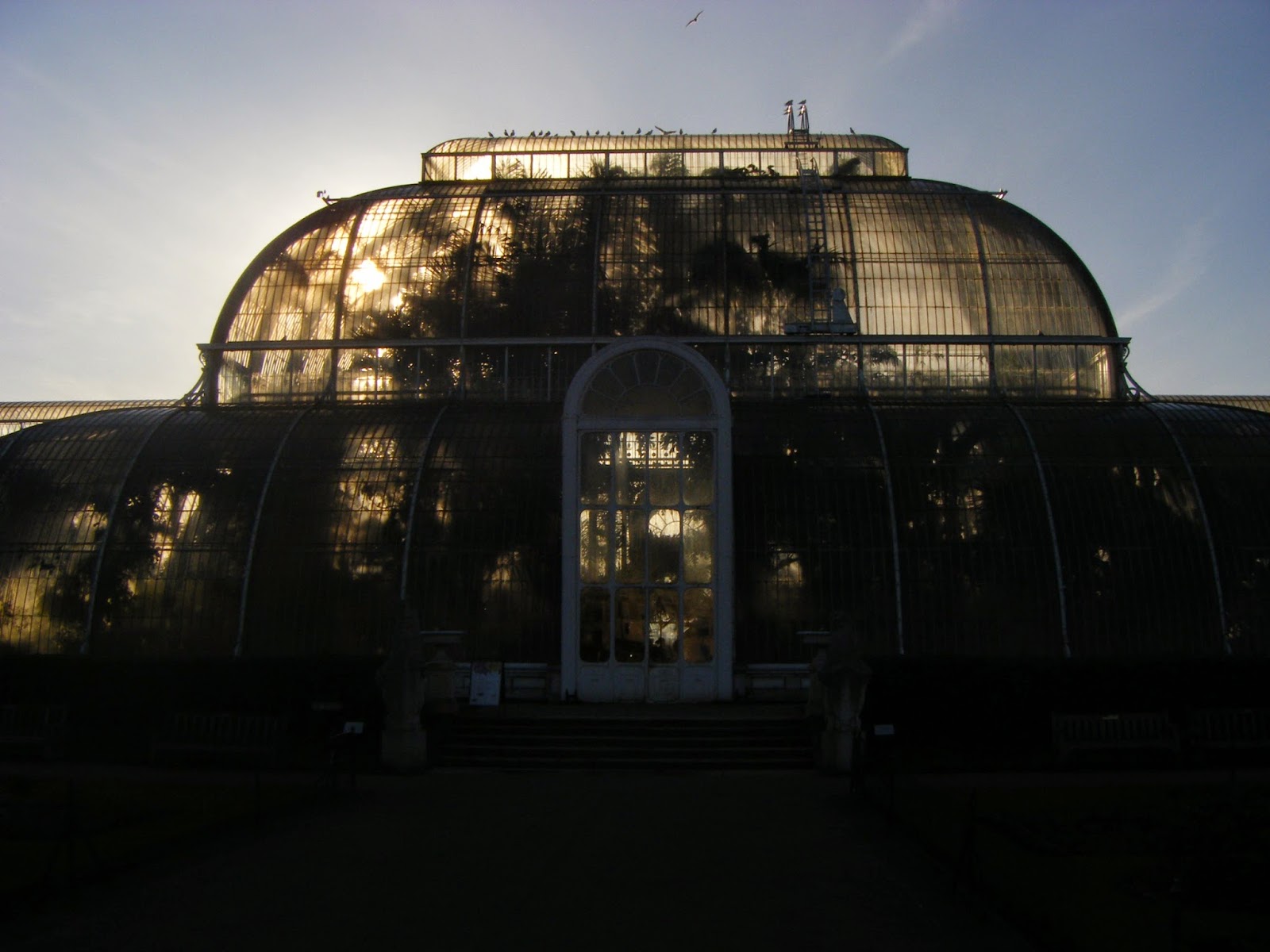 There were too many cross-pollinating ideas in this article not to mention it ...
Apparently, there’s a new cocktail experience, the Gin Garden, at Kew Gardens Orchid House.

Coinciding with the “alluring orchids” festival, the Gin Garden offers four, two at each bar, one “hot”, one “cold”, all made with a certain famous gin associated with the capital.
The citrus comment us a blend of gin, triple sec, dry orange liqueur, shaken with pressed pineapple juice, sweetened with vanilla syrup, served over crushed ice – scented with orange, pink grapefruit and lemon grass.
The ‘hot’ option is a Hooker Hot Cup, inspired by the Hooker Orchid. Gin is mixed with gold needle tea, pressed blood orange, lemon juice, sweetened with Bhutanese spice infused with honey, rhubarb syrup served warm and finished with a flame of toasted winter spices.
I’m, er, hooked.
Find out more here.
PS The Lost Orchid is on Amazon in print and digital.
The Lost Orchid eBook: Pamela Kelt: Amazon.co.uk: Kindle Store
Here's…
Post a Comment
Read more 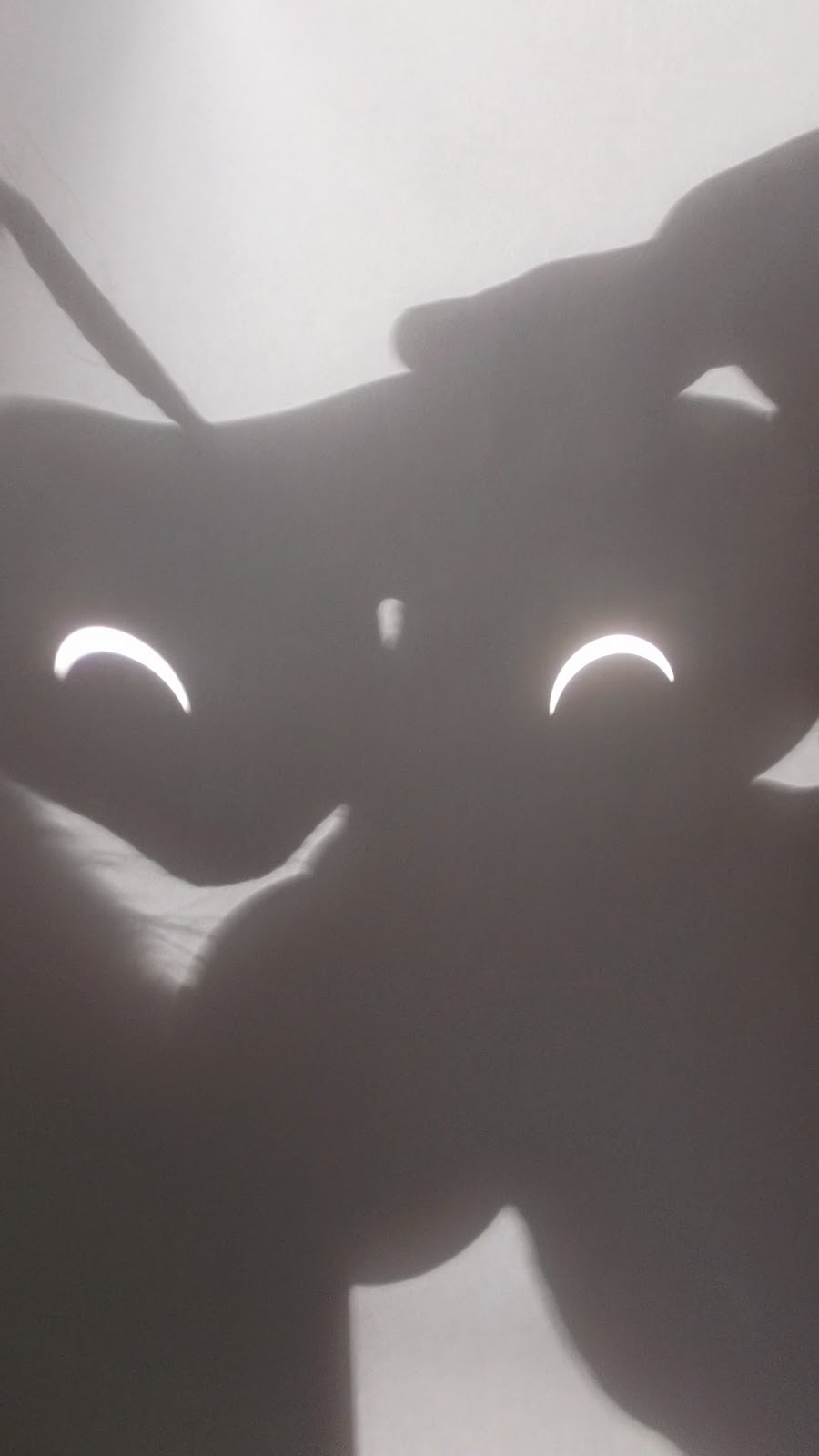 I’ve been reading about the eclipse, supermoon and vernal equinox for weeks while working on a supernatural mini-book, so this morning found me on my doorstep, coffee in one hand, camera in the other.


My husband Rob had the secret device, a sheet of silver foil with a hole in the middle.

By 9am the light was already dimming. It was more like an autumnal dusk than a bright, spring morning - although the birds were singing madly.

We managed a couple of tiny shots of the moon moving over the sun, then ... the brainwave. Rob fished out the binoculars and a sheet of white paper. Bingo.
The strange double crescents were like goblin eyes ...

It's all rather curious, because I'd planned my quartet of calendrical stories to coincide with the winter solstice, vernal equinox, summer solstice and autumn equinox before I even knew of the momentous celestial event this march.
Spooky.
LAST SPRING A supernatural story for the vernal equinox Unearthly goings-on in a very English churchyard.  Free on S…
Post a Comment
Read more

A supernatural story for spring 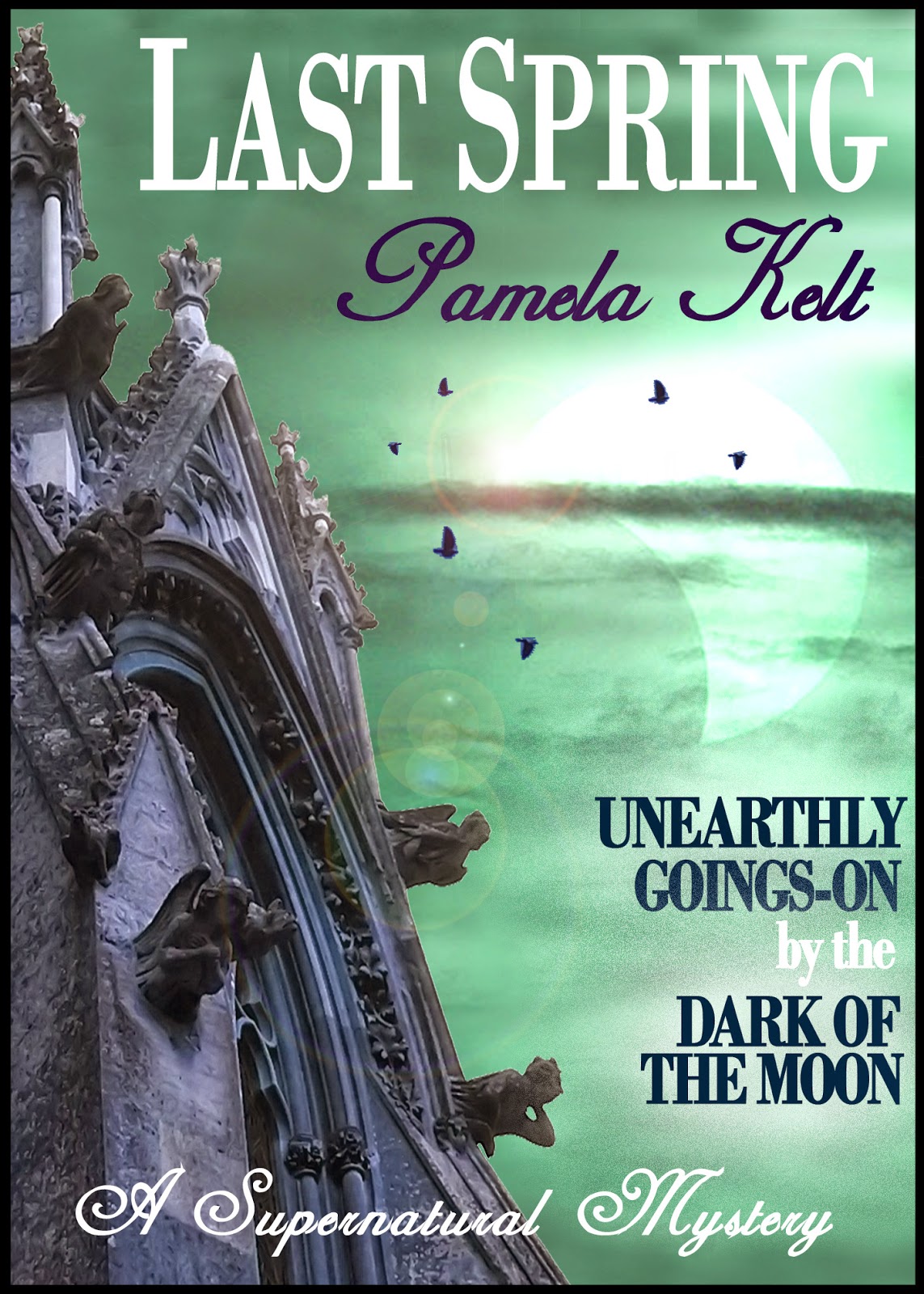 One chilly day just two weeks, we finally visited St Peter ad Vincula, a mammoth piece of Victorian architecture in the tiny village of Hampton Lucy.
The gargoyles alone are worth a visit, but the whole edifice is breathtaking, with its stunning stained glass, floral flooring and archetypal English churchyard (see a previous blog posting).
It’s a must for fans of the Gothic, and inspired the second in a seasonal series I’ve been doing. The newest title, Last Spring, is set in the late 1920s, when three celestial phenomena coincide ...
A Supermoon (although they didn’t call it that in those days), the vernal equinox and a total solar eclipse.
Sound familiar? You'll see why I wanted to get it published before March 20!

I used my own photo of the grotesque carvings for the cover, btw.

If you fancy a chilling story this March, you’ll find Last Spring free on Smashwords, along with part one, A Walk in the Park. 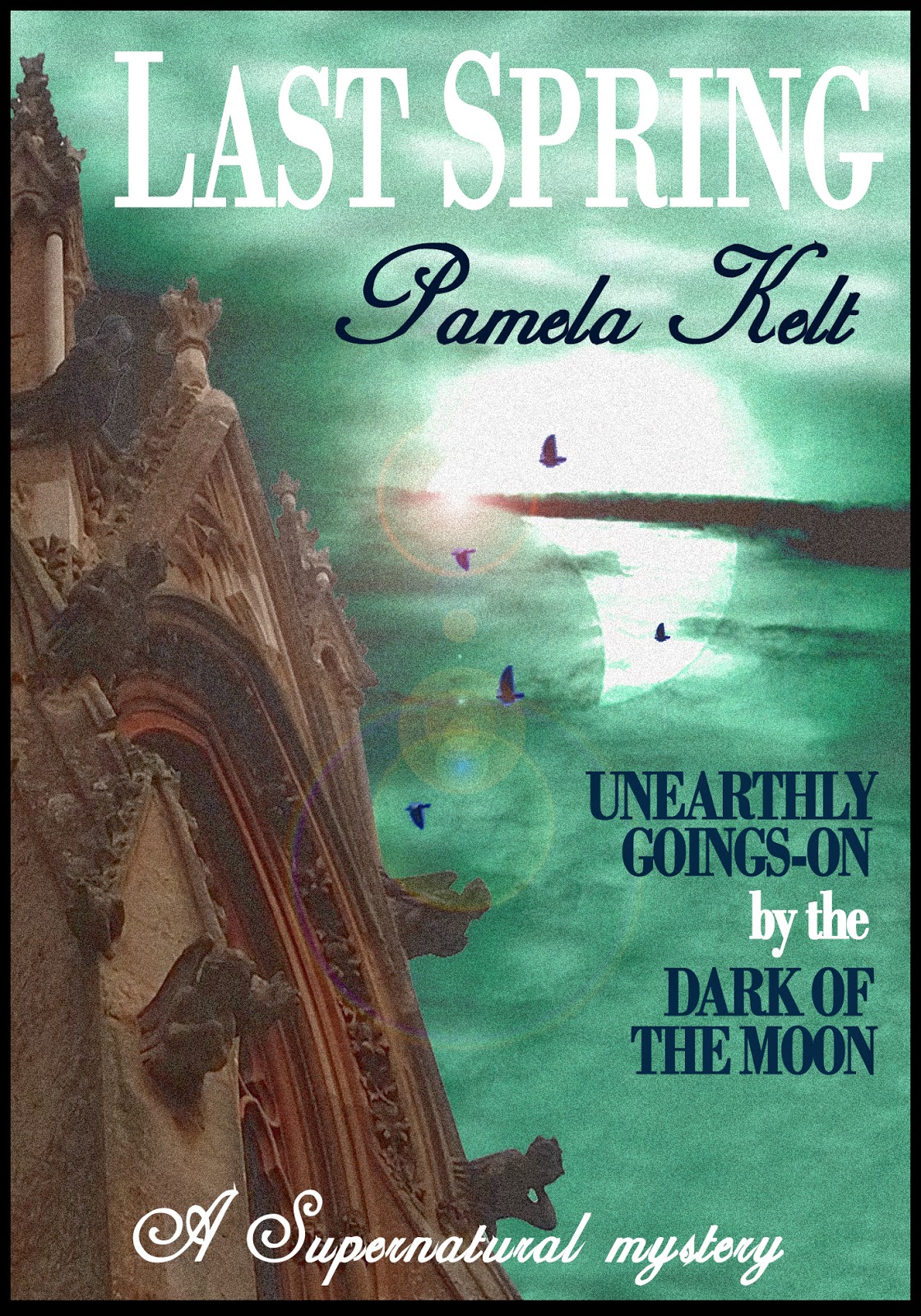 Here’s a sneak preview of the cover of my latest story, Last Spring.
In fact, at 10,000 words, it’s more of a mini-book – and it’s just out on Smashwords.

It’s the second in a quartet of supernatural stories inspired by the key events of the calendar year – the winter solstice, vernal equinox, summer solstice and autumn equinox.
Richard Lucy is a book illustrator, living in the quiet, Warwickshire village of Hinton Charlecote (inspired by a recent visit to Hampton Lucy).
Despite his hay fever, spring is his favourite season – until this year, when strange start happening in his rural idyll.

A Supermoon ... a solar eclipse ... a vernal equinox. All on the same day?
What on earth could go wrong?
Each tale is has a vintage, botanical theme, featuring new characters from different eras.
A Walk in the Park was the beginning, my response to a challenge to write a Christmas ghost story.
It’s a Victorian/Edwardian winter’s ghost story with a romantic theme. Set one midwinter afternoon, it intro…
Post a Comment
Read more

A touch of the perpendiculars 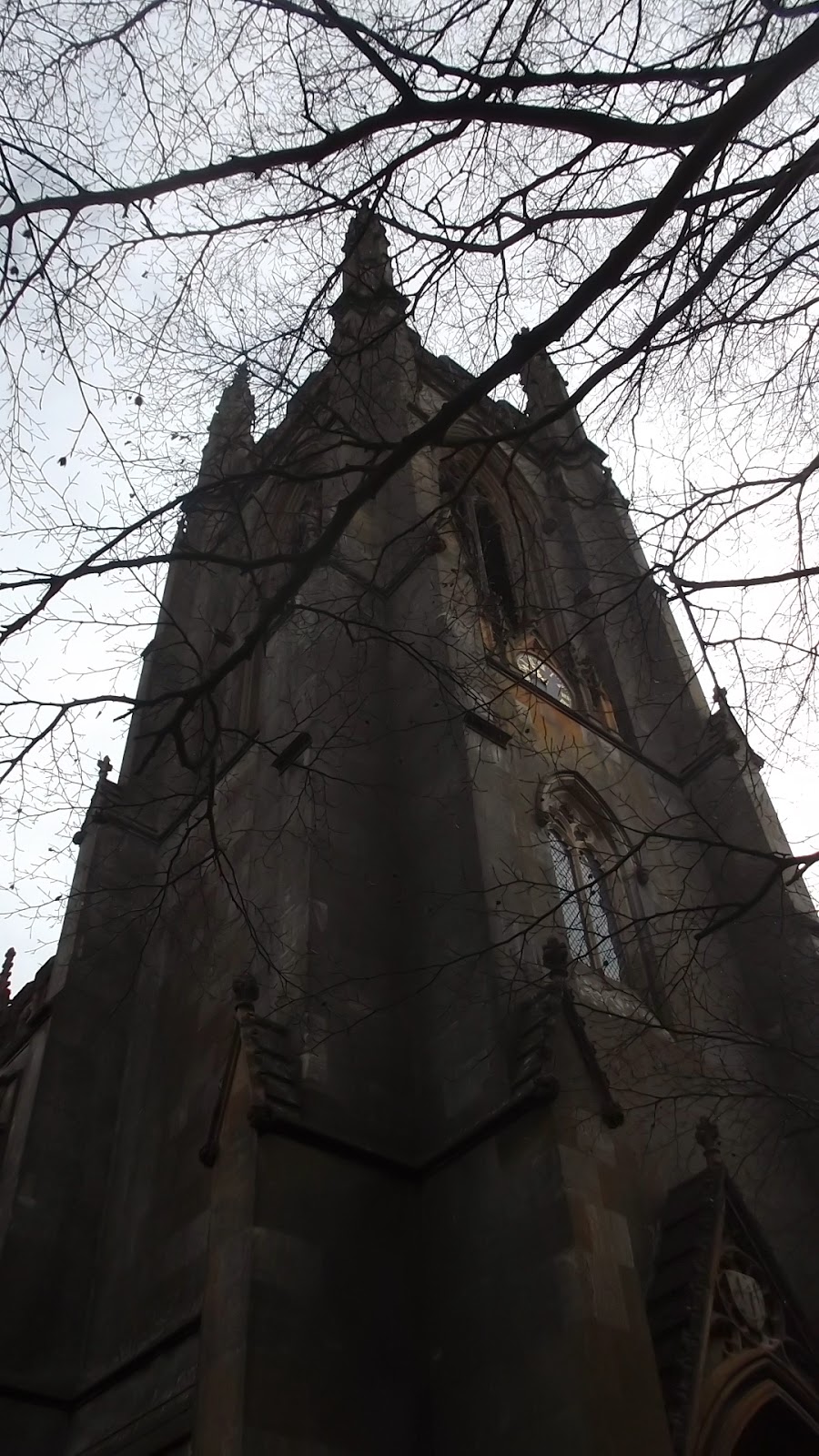 I only needed to go a few miles down the road to come across this magnificent piece of Gothic inspiration.

St Peter ad Vincula is a towering piece of English Perpendicular architecture in the tiny village of Hampton Lucy.
Commissioned by the Lucy family, it was built 1822 - 6 and a wonderful piece of Gothic inspiration.
For church enthusiasts, the nave was designed by Henry Hutchinson and the tower by Thomas Rickman. The chancel, porch and apsidal sanctuary were added in 1858 by Sir Gilbert Scott. The east window is by Thomas Willement and depicts the life of St Peter.
Pevsner describes the church as ‘a very good example of early 19th-century church architecture, the richness of which is due to the generosity of funding’.
A typically academic understatement.
I was particularly taken by a botanical link. The theme of the current book in progress, The Blackfern Conspiracy, is all about mad plant collecting in the 19th century.
It transpires that the son of the local blacksmith in Hampton Lu…
Post a Comment
Read more
More posts