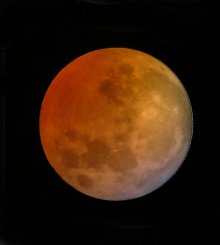 As autumn colours start to glow in the countryside, I for one will be looking upwards for a sighting of a rare and dramatic blood red “supermoon”.

Some religious types are busy recalling a sentence in Book of Joel, which is claimed to be portentous in a year when there has already been a total solar eclipse. ‘The sun shall be turned into darkness, and the moon into blood, before the great and the terrible day of the Lord comes.’ Ooh.

Actually, I thought the March eclipse was imore than just a little creepy when the sunlight dimmed on a bright spring morning. Oddly enough, this coincided with the timing of 'Last Spring', the second mini-book on a seasonal theme. Hmm. 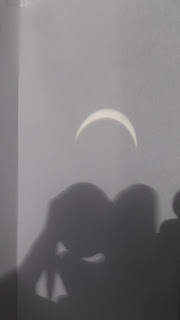 I’m loving the Gothic images all over the press, ingenuously hinting at all manner of sensationalist forebodings of doom, while pooh-poohing them. Just like I’m doing!

Well, it’s the first time in 30 years that a lunar eclipse has coincided with the moon at its closest point to the earth.

“Blood moons” have been regarded as ill-omens by the superstitious. I’m particularly intrigued by Monday’s event as it is the culmination of four total eclipses at six monthly intervals, known as a “tetrad”.

In the States, pastor John Hagee who hails from Texas, notes that this has happened only three times in the past 500 years and claims it is likely to herald a “hugely significant” world event.

His best-selling book, named imaginatively, ‘Four Blood Moons’, states that the last three incidents were each associated with a globally significant religious event. Far be it from me to say that such events are happening all the time. Here are the contenders:

1493 – the expulsion of Jews by the Catholic Spanish Inquisition
1949 – the establishment of the state of Israel
1967 – the six-day Arab-Israeli war.

The vampiric colour change, so I am assured by astronomers, is due to sunlight being scattered by the earth’s atmosphere. That sounds rather dull, but the effect should be fascinating, if a little unsettling.

Whatever happens – and doomsday prophesies aside – there’ll be lots more waffle about perigees and phases, and yet more photos of a rust-red globe suspended in inky sky.

We’re currently in Mid-Wales and it really will be blinking dark at 1.10am when the eclipse starts. There are bats galore and we hear owls every night.

Not that I’m nervous. Not me.

I’ll just be standing out there in the pitch black in my nightdress and wellies, not thinking about werewolves or creatures of the night or anything. No, no, no. Just staring a blood red moon.