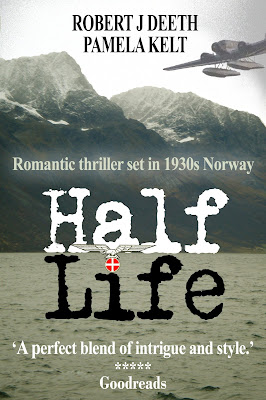 It's fun designing new covers. Next title to get the treatment is Half Life, a pre-WW2 mystery I co-wrote with my husband, Rob.

We visited Tromso some years ago, and this inspired the story ...

It is autumn 1936. Clouds of war are gathering in Europe and the Fascists are covertly assessing possible nuclear resources in Scandinavia. High-flying Cambridge nuclear scientist Dr Dulcie Bennett travels to northern Norway to join an elite group of researchers eager to unlock the secrets of the atom. She makes a startling breakthrough on an experiment but a suspicious lab explosion derails her plans. As she investigates, she encounters troubled Canadian journalist John Kirkwall, in Sohlberg on a personal quest, and they are drawn to each other despite initial misunderstandings.

As winter grips, they become embroiled in a shady world of murky political skulduggery and sexual intrigue, populated by spies, saboteurs, neurotic academics and secret police in a tense race where the victor could tilt the balance of power in Hitler’s favour.

The 2016 version of Half Life is now out on Amazon.

PS When you read about the seaplanes, you'll realise the authentic detail, down to the number of fuel tanks!
adventure Half Life historical fiction Pam Kelt Pamela Kelt Robert J Deeth romantic fiction