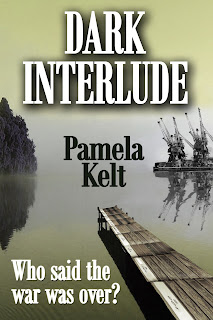 It started out as one of those days. Good intentions, lousy internet connection, distractions galore.

Then suddenly, up it popped on a Google Alert.

A Goodreads five-star review for Dark Interlude, an adventure set in Scotland in the aftermath of WW1 when revolutions was in the air.

The icing on the cake for me is that it was by Lexie Conyngham, the author of the Murray of Letho series.

If you haven’t read any of these, you are in for a veritable feast of murder and mayhem by one of my favourite authors. You’ll find her books here – and her blog is a delight.

'I'm delighted to have been able to read this at last after it had been withdrawn for a bit.

'As usual, the author's language and scene-setting are terrific, atmospheric, touching and expressive. The plot centres around an archivist cataloguing a dead academic's collection, then finding that her death is not as straightforward as she has been led to believe. We are led into the Glasgow riots just post First World War, with a pretty even-handed and vivid account of strikers' demands, the authorities caught on the hop, fear of the Bolsheviks and the aftermath of the horrors of the war. The excitement was building from around 50% and I didn't think it could be realistically sustained, but it was - a page turner right to the end.

'I really enjoyed this and I'm very much looking forward to the other one I've got my mitts on!'