Who says the war is over? 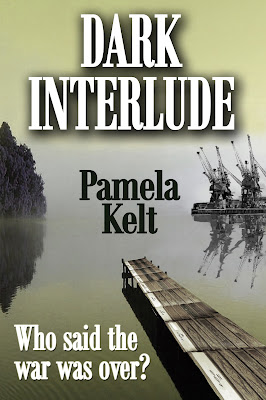 Dark Interlude is a post-WW1 adventure set in Glasgow against the backdrop of ‘Black Friday’. I've decided to publish this independently, so my first step was to devise a new cover. So, what is it all about?

It was a difficult time for many. Troops were returning to civilian life after the war and despite the so-called victory, life was harder than ever and spirits were low. In the dockyards, there weren’t enough jobs to go round, so the unions decided on a drastic solution – agree to a shorter week to give everyone a chance. Less money was better than no job at all. The employers disagreed and the unions mobilised themselves into a massive protest, with thousands of people filling George Square. The authorities panicked at the sight of the red flags – and Churchill called in the troops. Soon, tanks were rolling in the city streets.

After some running battles, the soldiers finally took control and a full-scale revolution was narrowly averted.

Photographs taken at the time are shocking, all the more so when one reads more about the disillusion from mid-way through the ‘Great War’ and beyond. Cities the world over were brought to a standstill by desperate workers, resulting in quickfire riots and ruthless retaliations. This global dissent went on for years. I compiled a timeline of such events on the Dark Interlude blog.

In Dark Interlude, the events of that fateful winter are seen through the eyes of a young archivist, Alexandra Milton, a specialist in 17th-century Spanish, who is ousted from her job by the return of the senior archivist from the war.

Thousands of women were similarly dismissed, and we follow her adjustment to being sent to a small market town where she is obliged to carry out the cataloguing of a legacy. It soon becomes apparent that the benefactress did not meet her end by natural causes, and there is intrigue afoot, ending up with Alexandra being caught up with conniving revolutionaries in the heart of Glasgow’s tinderbox docklands. 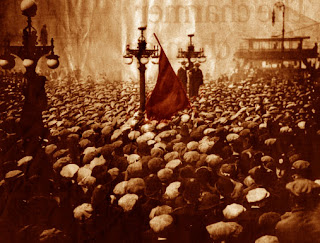 How much of this can one convey in a single image? The previous cover was a blend of a 17th-century document, a Victorian city skyline and the profile of a young, determined woman gazing over the scene. All well and good, but I’m not such a fan of stock photos of people, so I went back to the beginning.

The original story was inspired by a visit to Loch Lomond some years ago, so a Scottish-looking loch, shrouded in mist, became the background. I inserted cranes as a counterpart to the trees to suggest the clash of city-life versus country life, then turned my attention to the jetty, bridging the two. After some twiddling, it struck me that the boards reminded me of leather-bound books, so in keeping with Alexandra’s expertise, I reworked a photo of my own, skewing the image to fit.

The khaki colour scheme suggests, I hope, a tired, military connection along with the drab, post-war weariness.

Fonts were the next consideration and I had some fun browsing posters and billboards from the period, some of which were still distinctly ‘art nouveau’, with plump, curling fonts more suited to Paris of the 1890s, to stark ‘sans’ fonts of political placards.

So it evolved. The final step was some basic formatting – and after a mini-skirmish with auto-vetters, it’s now out on Amazon and Smashwords.