Striking a blow for bagpipes

July 30, 2016
I’m always wary of coincidences. It’s always particularly annoying in a movie or drama, when you suspect the author just needs to speed things along.

However, a hilarious coincidence happened to me the other day, which had me in bits, to the amusement of passers-by.

There I was in Morpeth. Long story short, my husband Rob had a day conference in Leeds, so we extended the trip to spend some time in the Northumberland borders en route back to the Scottish Borders.

Rob headed south on the train and I went into town. First stop was Information, and then I came upon a sign that made me boggle. The Morpeth Bagpipe Museum.

In itself, this is not as incongruous as it sounds, for there is a long and proud tradition of piping in the North-East. What was personally amusing is that my daughter, Lauren, is writing a dissertation on the significance of musical instruments in the marginalia of Books of Hours, and has a chapter on ... bagpipes.

Now bagpipes are interesting for a number of reasons, not least is that the nobility found them rather vulgar, with the associations of animal parts and the expressions assumed by the players. Pigs playing bagpipes are a recurring theme in illuminated manuscripts and in other decoration. You only have to visit Melrose Abbey to see this for yourself (see picture). Lauren had just been to stay and regaled us with all manner of quirky bagpipe-related references. 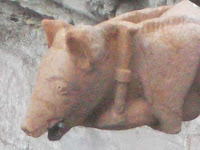 (A previous essay dealt with whelks, and that was almost as riveting. Medieval art is really quite interesting in a Stephen Fry kind of way.)

So there I was, outside what I believe is the world’s only bagpipe museum. And it was quite charming. Situated on the top floor of a stone chantry, showing how seriously the enterprise was taken, it was well laid-out, informative and attractive. You could listen to different styles (with headphones, of course!), see facsimiles and learn how this unusual brand of instrument came to be. And yes, there were many images of bucolic peasants being coarse and enjoying themselves at feasts tootling on all types of rude-looking musical paraphernalia.

When we booked our hotel in Morpeth, I got an email trying to sell me car hire and such like saying ‘Pamela, turn your trip to Morpeth into an adventure’. See?

I giggled at first, without realising how prophetic it was. So there you have it. My adventure with bagpipes. In Morpeth. You couldn’t make it up.
bagpipes Morpeth Pam Kelt Pamela Kelt Scottish Borders writer