July 13, 2017
I collect stone circles. Not literally, obviously, but over the years, I’ve been adding to my list of sites visited: Southern Sweden, the South-West of England, Aberdeenshire and now ... Duddo.

Duddo? I hear you ask. She’s spelt it wrongly. But no. Duddo is tiny village near Etal – and that’s spelt correctly, too, in north Northumberland. 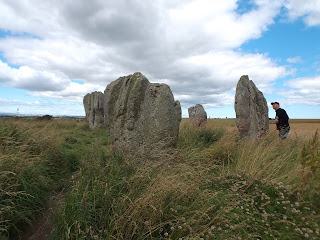 I live in Hawick in the Scottish Borders and it sounds long way away, but due to the vagaries of the English/Scottish border, it’s actually rather close (four miles).

I know the Borders quite well, and I’d no idea there were any standing stones in the region at all, to my shame, but during a chance conversation with a volunteer at Wallington estate (see more in another blog to come!), Duddo cropped up.

So, on a bright sunny summer’s day (yes, we do get them in Scotland), and drove the zigzag roads around the acres of ripening wheat to Duddo village. 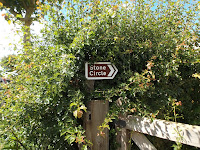 Stone circle fans will know it can be something of a pilgrimage to locate said sites, but the signposts were clear. We parked on the grass verge at the side of a narrow road and set off across the fields, saying hello to fellow travellers on the path to archaeological enlightenment. 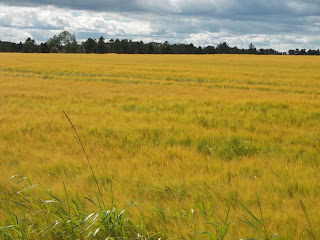 I felt like St Cuthbert himself, wandering the gentle pathways of the Borders, with very little sign of human intervention on the landscape. Amid that scene of rural splendour, we were aware only of skylarks, swishing corn, butterflies and bees. Only an occasional con trail or distant tractor reminded us of modern life. 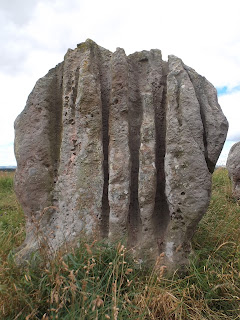 We rounded a corner and there on a low hill were the stones, a ragged assortment of rocks looking more like the pulled teeth of giants lay ahead. 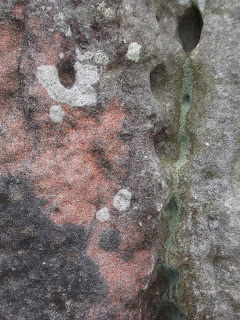 Ten minutes later, we had arrived, and were astonished. Only five stones remain out of seven, but they are huge, rilled lumps of sandstone, encrusted with coloured lichen. A small circle, by Avebury standards, but ruggedly epic and endlessly photogenic.

Experts believe they were erected in 2,000 BC. The tallest is 2.3m, higher than a modern-day man and one appears to have mystical Neolithic cup marks, which have inspired all manner of theories about gory sacrifices. Human remains were found underground in the centre some years ago.

Why were such stone circles built? Even with all the trappings of modern-day technology, we can only conjecture, which adds to the mystic beauty of these sites. (You only have to think of the opening credits to Outlander to appreciate the appeal. I even wrote Midsummer Glen, a short story on the theme.) 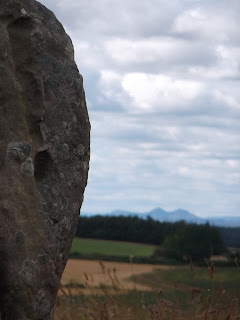 The setting is particularly majestic, with prominent landmarks such as the Yeavering Bell, a twin-peaked hill near the River Glen, and the Eildons, the distinctive triple-mound visible in the far distance (above).

The Duddo stones, proudly standing on a hill with wrap-round panorama, must have been a landmark for travellers over the centuries. Curiously, it is actually on a line linking Melrose Abbey with Lindisfarne. St Cuthbert himself must have seen it on his travels. In fact, would it be too fanciful to think the ancient site, with its spiritual resonances, might have inspired later ecclesiastical types to settle in these Borders locations?

Going completely berserk on the conjecture front, was Melrose significant to the early Christian founders because of the ‘trinity’ of Trimontium, the Roman name for the three hills that form the Eildons. I’m sure some expert has thought of this, but I haven’t found a reference.

So. Duddo. A stunning and inspiring place which doesn’t even rate a mention on my road map.