Some years ago, I was raiding a charity shop in Leamington Spa and came across a batch of classic murder mysteries. I forked out the princely sum of £20 for nearly 100 books. 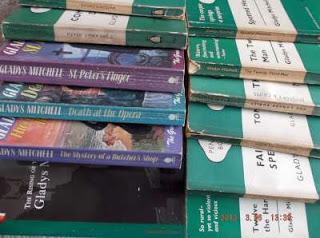 Several dozen were by Gladys Mitchell (below,right), a crime writer whose quirky style I came to appreciate.
Gladys was something of a free spirit. The murders were all rather dashing, almost lurid. The characters so non-stereotypical it was hard to guess whodunnit. The settings were all so different and unexpected …

The investigative journalist that lurks in all of us got the upper hand a few years ago. I decided to drag Gladys into the spotlight and do a biography. Why not? It couldn’t be that hard!

I rummaged around, tracking down some former neighbours and such. It’s only when I found some rare ‘Dark Lady’ sonnets that I realised she might have been secretly gay. If true, it suddenly made sense of so many of her plots in which sexuality and sexual orientation was a turning point.

In due course, I felt the publisher and I didn’t see eye to eye on the issue and after some years, collected up such papers as I had and posted them off to a true devotee in the US where they might be appreciated. (The tribute site is a real gem, a must for fans of vintage murder mysteries.

Ms Mitchell faded from my life, apart from writing the occasional fan blog – until recently. I’ve been blogging a little about a recent fascination with ancient stones. Jason himself reminded me that Gladys was inspired by such phenomenon and penned several titles on the theme.

After some foraging, and a download or two that were more complicated than some of Gladys’ plots, I tracked down my prey: The Dancing Druids and Whispering Knights. The latter particularly caught my attention for we visited the Rollright Stones just last year. If this is your cup of tea, the Rollright Stones is a ancient site located on the Oxfordshire/Warwickshire border. The complex consists of three main elements, The Kings Men stone circle, the King Stone, and the Whispering Knights. (It also featured on the BBC drama, Father Brown, just a few months ago.)

During the search, I found several others written during her prolific career, revealing a lifelong interest in the subject, as noted in a 1980 article by Patricia Craig.

For deliciously macabre scenes involving to ancient rituals and mystic stones, look out for The Mystery of a Butcher's Shop; Come Away, Death; plus a hard-to-come-by children’s book, The Seven Stones Mystery, written under the pseudonym of Pamela Stewart. (I’m sure Jason will know of more!)
Well, that’s my summer holiday reading sorted. 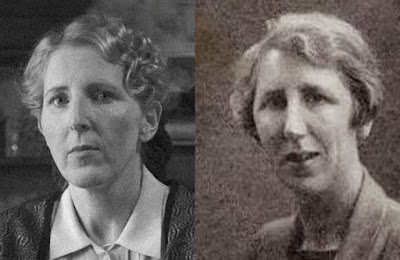 PS. If anyone decides to make a drama/documentary about the irrepressible Gladys, go no further than the talented Fenella Woolgar, recently seen as Alison Scotlock in the recent TV drama Home Fires. The resemblance is astonishing, almost spooky ... It’s almost as if the ghost of Gladys Mitchell has come back to haunt us ... Perhaps Fenella took the inspiration for her look from the jacket photo of Gladys, or are they related? The mind boggles.
blog fiction Gothic historical fiction Midsummer Glen Pam Kelt Pamela Kelt paranormal