C is for collaboration

But not in the spying sense ...

You might think this gal’s obsessed with spying, but this blog’s all about collaborating in quite a different way that doesn’t betray one’s country. It’s a literary collaboration.

In my case, I worked with my husband Rob Deeth on a ‘film noir’-inspired mystery called Half Life set in Norway before the Nazi invasion. A group of scientists at a nordic research institute is set on cracking the ultimate mystery of nuclear fission, but darker forces are afoot …

Now, with a background is in journalism and languages, what on earth was I doing setting a story in Norway, during the 1930s and based on physics?

All a result of a different kind of collaboration. Rob’s a professor in inorganic chemistry. He had the chance to get involved the intricate proceedings of a Norwegian PhD thesis – at Tromso. I’d always wanted to go north, not least because my Great Uncle Eddy, of the Paton clan on my mother’s side, was one of the many brave chaps involved on the Murmansk run. He survived to a ripe old age, although I never heard him tell of those days. I looked it up and felt compelled.

So, with family help, I became a conference groupie and north we went. It was our first trip together, sans enfant, for yonks. Three plane journeys it took. Birmingham to Schipol. Schipol to Bergen. Bergen to Tromso. We arrived at night, and when I woke up and saw the brooding mountains I was hooked. While Rob attended the PhD defence, I hit the museums and the galleries. 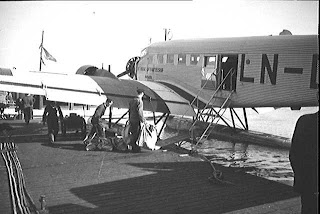 I think it was the statue to Amundsen that did it, though. Suddenly, I was plotting. He was quite a character. It was only when we returned to England that I came up with the science institute plot scenario. Why not use in-house expertise?

Anyone who knows Rob also knows his obsession when not chemistry-fying. It’s flying, and I discovered that in the 1930s seaplanes were big. Oh, boy. Did I pick his brains about seaplanes. This from one who will only fly when required and needs copious quantities of alcohol at both ends of the journey to justify the fear.

And then, of course, was the science. Thorium, to be precise. Just don’t mention that element in my daughter’s presence, unless you want the primordial adolescent GROAN.

Back to the collaboration. Chemistry professors are busy. We did a deal. I’d plot a few chapters, do some words and when I got stuck over, say, a gun, a lorry (truck for US readers), a seaplane, a cyclotron, German dialogue, how you get out of fist fight … well, I’d chat to Rob. (Note to self; should have done C is for cyclotron, except they’re a bit C for complicated.)

Forget annotated manuscripts. First step was to chat over What We Laughingly Refer To As The Breakfast Bar. That’s its name. We’d sit, over a nice G&T, maybe some nuts on a good day, and thrash over Thorium until our daughter complained.

Second step was the frenetic note-taking. I’d set Rob off. How do you start up a Junkers-style seaplane? Well, he’d say. Stop, I’d say. Head for laptop. Flex knuckles. Type furiously until he stopped. Or until the beeper announced dinner was ready. Daughter having left room in disgust.

Sometimes, we’d talk about stuff on long car journeys. Our daughter would be happy listening to music in the back and we’d be off. My lack of any scientific knowledge is horrifying (to scientists), but I reckoned, if I can understand the basics, then anyone can.

So, the book got written. By me. Then came the editing. My goodness, I didn’t know my husband was such a perfectionist. I nearly said pedant, but that’s not fair. Maybe it’s something to do with chemistry, or the fact that he’s a bloke, but I wasn’t allowed to get away with A THING.

‘He came in on the left, so when he left by the other door, surely that should be … somewhere else?’

There’s a well-known technical term for being caught out. It’s ARG. (Ah. Righteous Grab.) Or an acronym for something very rude. I use it a lot.

Some final touch-ups followed. German dialogue. Molecular quibbles (I kid you not). Endless (and I mean that in the deepest respect), endless chances to watch Youtube videos of seaplanes landing, taking off, landing, taking off … Yup. I did it all. Ahem. Seaplanes in the Thirties had three engines. You started the middle one first. I could probably do it myself, now.